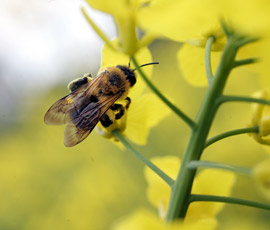 Two common pesticides used by British farmers could affect bees’ brains and their ability to learn, according to new research.

Scientists found when a bee is exposed to two pesticides – neonicotinoids and coumaphos – they target the same learning centre of the bee’s brain and it becomes slower to learn and forgets floral scents. And when the pesticides were used in combination, the effects were far greater, they said.

Neonicotinoids are commonly used in seed treatments to control crop pests, while coumaphos is a chemical used in bee hives to kill the Varroa mite, a parasite that attacks the honeybee.

The study, published in Nature Communications on Wednesday (27 March), is the first to show that these pesticides have a direct effect on pollinator brain physiology.

It provides further evidence pointing to the damaging effect of neonicotinoids, which have been linked to declining bee populations.

For the study, the University of Dundee’s Christopher Connolly and his team investigated the effect of the two pesticides on bees’ brains.

The intact bees’ brains were exposed to pesticides in the laboratory at levels predicted to occur following exposure in the wild and brain activity was recorded.

Scientists found that both types of pesticide target the same area of the bee brain involved in learning, causing a loss of function. If both pesticides were used in combination, the effect was greater.

They also found that bees exposed to combined pesticides were slower to learn or completely forgot important associations between floral scent and their ability to forage and find food.

The study is part of the Insect Pollinators Initiative, joint-funded by the Biotechnology and Biological Sciences Research Council (BBSRC), DEFRA and other partners.

The research was prompted by the work of collaborators Geraldine Wright and Sally Williamson at Newcastle University, who found that combinations of these same pesticides affected learning and memory in bees.

Dr Connolly said: “Together, these studies highlight potential dangers to pollinators of continued exposure to pesticides that target the insect nervous system and the importance of identifying combinations of pesticides that could profoundly affect pollinator survival.”

A European Commission proposal to restrict the use of three neonicotinoids – imidacloprid, thiamethoxam and clothianidin – to protect bee health will be discussed at an appeals committee meeting later this spring.

The commission draft failed to achieve a qualified majority in a vote on 19 March – 13 EU member states supported the proposal, with nine against and five abstentions, including the UK.