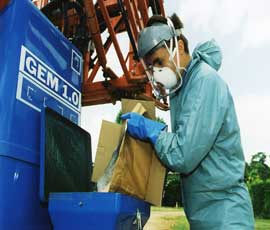 Farmers have just three weeks left to take advantage of an amnesty on old and unwanted pesticides.

Project SOE (Security of the Operational Environment) was launched in December to offer a subsidised pesticide and biocide disposal scheme, whereby people can dispose of any unwanted, out-of-date or revoked biocides and pesticides for a fee of £20.

The disposal scheme, launched to protect people, wildlife and the environment, gives growers the opportunity to check their chemical stores and clear out any non-approved products, such as IPU (isoproturon). It is based on a first come, first served basis, as funds for the project are limited.

But NFU plant health adviser Paul Chambers said the project has been so successful that the Home Office has had to increase its funding to keep it open until the deadline – Monday, 14 March.

“There was a limited budget for the project and if funding had run out it may have had to finish sooner,” he explained.

“However, the Home Office has been pleased with the success of the project and agreed to provide additional funding to allow it to run until 14 March.”

Mr Chambers said the project was a great opportunity for farmers, growers and gamekeepers to check their chemical stores and dispose of anything which is out-of-date or illegal for a small fee.

“We would encourage people to take advantage of the scheme while it remains open,” he said.

“Otherwise, after the scheme closes you may need to pay hundreds of pounds, depending on the volume, to dispose of your pesticides.”

A list of products to be disposed of, including quantities, type of packaging and information about the condition of packaging needs to be supplied at the time of registration. Additional pesticides not stated on the submitted list will result in an extra £20 charge for each pesticide.

The one-off registration fee of £20 is payable to Killgerm Chemicals Ltd, who are administering the scheme. For full details visit www.projectsoe.org/