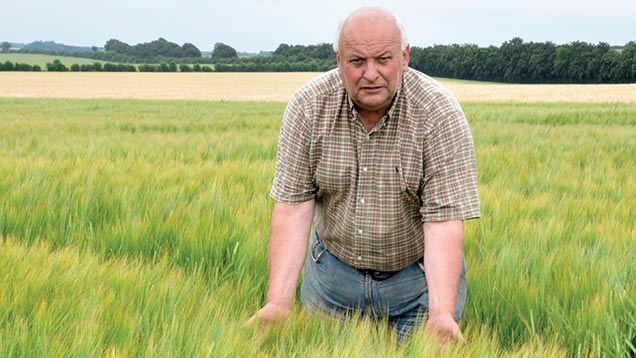 A fine seed-bed that can be rolled immediately after drilling is key to driving spring barley’s success on Alan Bullen’s shallow, light chalk soils.

This has helped achieve yields of up to 8.9t/ha from his Irina spring malting barley last year and has squeezed winter barley out of the rotation.

“There is a real demand for good-quality spring barley, and if you are able to make the premium as well, then it is a no brainer at the minute,” he says.

The high yield is a long way above the 7.5t/ha spring barley farm average at Lodge Farm in Fulbourn, close to Cambridge and Mr Bullen is keen to build on his success this spring, using the same variety.

He has simplified his rotation to winter wheat, sugar beet and spring barley for the coming season, increasing his spring barley area from 60ha to 80ha.

Mr Bullen explains that spring barley can match the gross margins of rival winter crops due to it offering lower inputs and healthy premiums.

It will now equal his winter wheat and sugar beet area, taking up about one-third of his arable land and helping to spread the workload on the farm.

He points out that ensuring a fine seed-bed holds the key to a successful spring barley crop by helping it get away quickly early in the season and form a good root system that can cope with dry conditions which may occur later.

“I will not drill spring barley until I have got a nice fine seed-bed that can be rolled straight after. Muddling it in, in February, can be a disaster because spring crops never recover from any check in growth,” he explains.

His spring barley ground is ploughed and pressed in the winter before he uses a flexi coil and power harrow in the spring to achieve a fine seed-bed.

About 90% of his spring barley crop is normally sown in March, although he stresses soil conditions help dictate the drilling date and he has previously drilled in February.

Nitrogen applications hold the key to ensuring he can collect the best price for his crop and he explains tailoring the right programme for each season is essential.

All his soils are tested in February to gauge the levels of nitrogen left in them and then he will apply between 50kg/ha to 120kg/ha.

“The nitrogen requirements from maltsters are very tight, so you can’t push it too much. The last thing you want is your malting barley going for feed and lose out on the premium,” he says.

Farming on just six inches of topsoil above chalk, Mr Bullen is keen to build the soil fertility by chopping and incorporating the straw back into the land and incorporating organic fertiliser into his rotation.

This has helped boost soil fertility and keeps P, K and Mg indices between 2-3. He explains this reduces the chance of anything holding the crop back and gives it the best opportunity to thrive.

In addition to soil fertility, Mr Bullen puts a big emphasis on seed rate, opting for about 230kg/ha.

“We go for quite a high seed rate, so that in a dry year, if it doesn’t tiller as well as we would like then there will still be a good seed density,” he says.

Spring barley now forms a crucial part of the rotation, offering the opportunity for grassweed control.

Blackgrass has become a burden across much of the arable landscape in the UK, but Mr Bullen has managed to keep the problem under control, using stale seed-bed techniques prior to spring drilling.

In last season’s high yielding crop, Mr Bullen opted for two herbicides with broadleaved weeds and wild oats some of his key targets.

Jason Noy, agronomist at distribution group Farmacy, points out that with few herbicides available in the crop to tackle blackgrass, maximising the stale seedbed is crucial and ensuring good early establishment will allow better competition against weeds.

He points out that Irina could prove a useful option for other growers having already performed so well on Mr Bullen’s farm, which hosts KWS’s spring barley trials.

“In addition to the high yield, it is also a high tillering, stiff variety which may be useful after some of the lodging seen in last season’s crops,” says Mr Harrap.

According to Dr Richards, the variety now has the green light from leading brewers on the continent, including Carlsberg, Heineken and Radeberger, for use in a wide range of beers.

A decision on approval in the UK by the Institute of Brewing and Distilling is not expected prior to May 2015, but Dr Richards is confident it will achieve approval and be able to compete in the UK market.