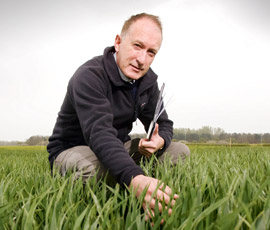 Inadequate EU and government policies and growing problems with pesticide resistance are the biggest brakes on the sustainable intensification of agriculture, said Keith Norman, technical director of Velcourt as this year’s CropWorld Global event.

Burgeoning blackgrass resistance, with leading herbicides only 60% efficient, a huge shift this year in septoria resistance to triazole fungicides, and pyrethroid resistant aphids, which were unknown two years ago in the UK, were just a few examples of the resistance challenges farmers now face, he said.

With huge pressure from slugs this autumn restrictions on slug pellet use was another major issue.

And a new herbicide destined for oilseed rape failed to gain approval in time for autumn use, because the policy group failed to make its decision in time, leaving two key weeds uncontrolled.

More research is needed, with more practical relevance to growers, and better channels of communication to policymakers, so issues seen at ground level are addressed more effectively, he suggested.

The UK model of chief scientists in central government departments should be adopted across the European Commission and national governments, he suggested.

At present the EU Parliament took advice from a chief scientific advisor, but EU Agriculture Commissioner Dacian Ciolos seemed not to take any scientific input into how agricultural policy is developed.