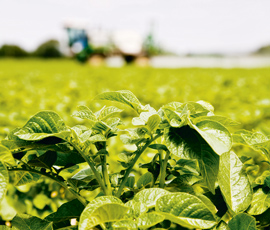 Potato growers are being warned to be on the alert for blight after four suspected cases of the disease have been reported, with the key risk period quickly approaching.

The cases – in Pembrokeshire, Herefordshire and two in East Anglia – are being investigated, while scattered weather warnings of blight have been seen across the country.

As the four cases are being tested by the Food and Environment Research Agency (FERA), growers are being urged to check potato dumps, or outgrade piles, for signs of the potato’s most damaging disease.

The potato industry uses period of warm and humid weather, or Smith Periods, to raise the alarm, and growers are very wary after last year’s wet summer prompted high levels of blight.

“We are seeing scattered Smith Periods generally in the South West, and are now starting to see them across the whole country,” says Gary Collins, blight specialist at the Potato Council.

The risk of blight is increasing with the current warmer weather and as many crops are meeting across the rows creating their own micro-climate.

“We would advise growers to keep a careful eye out for blight and watch out for blight-infecting outgrade piles or dumps,” Mr Collins says.

Warm and humid weather last year produced the highest number of outbreaks of blight since the Potato Council’s ‘Fight against Blight’ monitoring began in 2003.

The first blight case was recorded last year on 16 May in Herefordshire, and Mr Collins warns there could be a high level of inoculum in volunteer potatoes, outgrade piles and seed, so growers should be alert.

Reuben Morris, roots technical manager at adviser Frontier, says there are signs blight pressure is now starting to build across the country.

“We are seeing downy mildew in bean crops and this is an indication that conditions are now conducive to potato blight,” he says.

Many growers are currently spraying with protectant fungicides due to the low disease pressure, but as the pressure rises they will need to switch to more curative products, he adds.

“Growers should be vigilant with an eye on the weather and prepared to move to more curative products with kickback action,” he says.

Independent agronomist John Sarup says many of the crops he manages in Yorkshire and up to the Scottish Borders have already had three to four blight sprays.

“It is inevitable that blight will be coming so we are looking to protect crops in the current rapid growth stage,” he says.

Further north, Scottish agronomists say potato crops are now at risk from blight with current humidity levels, leaf wetness and warmer evenings. Future disease levels will be dependent on the levels of intermittent rain and humidity, they add.