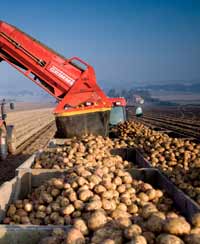 This year’s potato crop was up 3.5% on last year at 6.2m tonnes, according to a provisional Potato Council estimate.

The planted area was relatively unchanged at 130,231ha, but favourable growing conditions meant the average yield was over 3% higher at 47.2t/ha, compared with 45.7t/ha last year.

But, drier conditions later in the season led to some harvesting problems, which could have implications for the marketability of some crops, the Potato Council said. “This [dry weather] tended to result in poor skin finish, and later high dry matter levels and excessive bruising during lifting. As a result it is expected that wastage will be high during the 2009/10 trading season.”