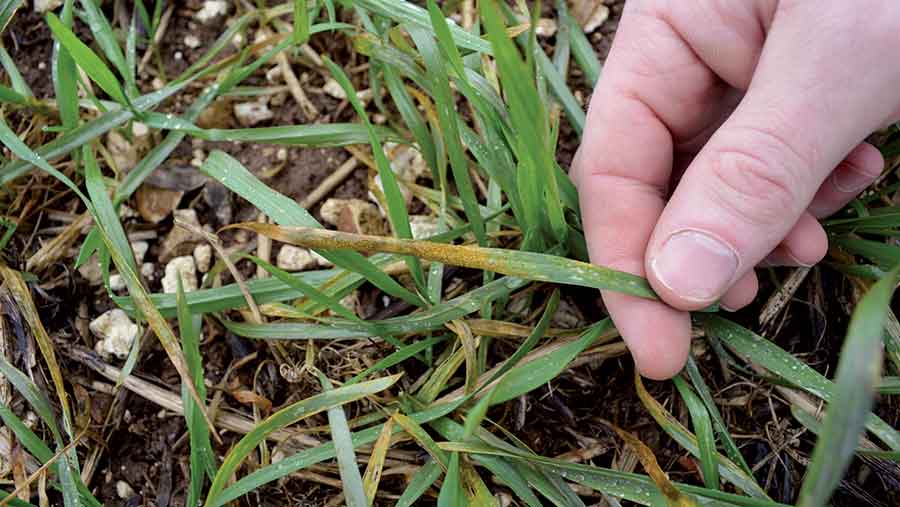 Cereal growers are being urged to prepare for their first fungicide spray of the season, with drier weather forecast and high levels of disease in crops.

Plenty of septoria and rusts are being seen in winter wheat as most growers are gearing up for a T0 spray in the last 10 days of March.

“The progression of the disease has been staggering this year, even on more resistant varieties. The amount of septoria wheat crops are harbouring is huge,” he tells Farmers Weekly.

Wheat crops in Dorset and Wiltshire are likely to get a T0 spray in the last week of March or into early April, says Mr Jex, who works for agronomy group Agrii.

“There are some pretty horrendous cases at the moment, so we will need to get more than just protectant activity from the T0 this season,” he says. He advises growers to use a systemic azole fungicide with a protectant such as chorothalonil.

Chris Bean, technical director at agronomy group Zantra, says many of his wheat crops in Kent and south Essex will see a T0 spray in the last week of March.

He says the weather is sunny at the moment but temperatures are low, so wheat is not romping away. Crops are just showing the tip of leaf four, while T0 is when leaf four is well emerged. 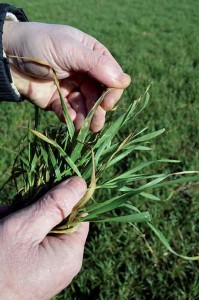 “Septoria is easy to find and there is brown and yellow rust in crops, so in most cases my approach will be an azole-chlorothalonil,” he adds.

In his mainly bread-making wheat area he is seeing brown rust in Crusoe and yellow rust in Skyfall, with septoria across most varieties.

Norfolk grower Andrew Hunt is preparing to treat his wheat with an azole-based T0 as his 350ha of winter wheat is covered in septoria.

After a mild winter and heavy rainfall of 60mm this month, septoria infection on the older wheat leaves is likely to have been spread to newer leaves by rain splashes.

He is seeing septoria across all his wheat varieties, including Lili, Revelation, Reflection and Diego, as well as brown rust and yellow rust on the 1,262ha of arable land he manages at Great Melton Farms, eight miles west of Norwich.

In Bedfordshire, Buckinghamshire and Hertfordshire, agronomist Andrew Havergal, with advisory group Frontier, reports septoria is everywhere in crops, but yellow rust is more variety related as he sees T0 about one week to 10 days away.

“If it warms up, we will need to get on quickly with an application because even though crops will start to grow, disease could really take off,” he says.