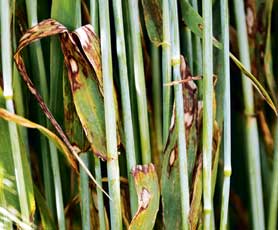 Protection of current actives, as well as efficacy, is a good reason to consider switching to a new SDHI fungicide in barley crops this spring, says Simon Oxley, a plant pathologist with SAC.

Although resistance to fungicides in barley diseases is generally less serious than in wheat, continual use of one active, or type of active, will break them, he says.

Rhynchosporium is the major concern. While field performance in 2010 was as expected with all fungicides, laboratory tests showed rhynchosporium was less sensitive to all types of fungicide compared with 2008-09.

Intriguingly, the research also showed rhynchosporium was more sensitive to fungicides on resistant varieties, and in spring barley compared with winter barley. “They are interesting observations, albeit more academic, than of practical benefit to growers as yet.”

Sensitivity testing of spores collected after treatment with straight Proline (prothioconazole) also showed the disease was less sensitive to the fungicide compared with where it had been used in mixtures.

“If you use these fungicides by themselves you will break them. Always use them in mixture.”

The new SDHI fungicides, Bontima (isopyrazam + cyprodinil) and Siltra Xpro (bixafen + prothioconazole), provide a new component for growers to use in mixtures, and will contribute to rhynchosporium protection.

“For effective eradication, the addition of prothioconazole is recommended,” Dr Oxley says.

Siltra Xpro has the edge over Bontima in high pressure rhynchosporium situations because of its in-built prothioconazole in SAC/HGCA fungicide trials, he notes. “But they are neck and neck on net blotch and brown rust.”

Both products also give excellent control of ramularia and abiotic spotting.

Pricing was an issue, however, he admits. “That has been looked at for this year, and it will be realigned in the market.”