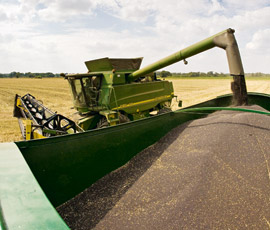 A near-20% premium is likely for oilseed rape growers switching to varieties with high levels of erucic acid oil, which could help buffer them from the recent fall in rapeseed prices.

These niche varieties make up about 3% of Britain’s oilseed rape area, but can earn a bonus of £60-plus/t by growing the crop for an industrial market.

These high erucic acid rapeseed (HEAR) varieties are lower-yielding and have higher seed costs than conventional varieties, although the annual market of more than 50,000t is growing.

“We are still looking for acreage to meet projected oil sales so we would love to have more growers,” says Nigel Padbury, technical sales and marketing manager with Technology Crops.

He adds there is a underlying slow rise in demand for the oil from HEAR varieties to be used as industrial lubricants in the plastics and oil industry, and also in paints and printer inks.

Most modern rapeseed varieties are low in erucic acid levels in the oil for safe human consumption, typically less than 2%, while HEAR varieties contain 50-55% erucic acid.

The recent slide in rapeseed price forced Technology Crops to abandon its fixed-price £410/t HEAR contract at the end of last week, replacing it with an offer of a 15% basic premium over conventional rapeseed.

HEAR varieties typically yield 3% more oil than conventional varieties, and buyers pay 1.5% extra for every 1% of oil above a standard 40% rapeseed oil content.

The group offers two varieties – Palmedor and Rejane – which it says yield 6% less than the top PR46W21 variety on the HGCA Recommended List, while HEAR variety seed costs – at about £110/ha – are higher than conventional hybrids at £80/ha.

Rapeseed price have drifted down to about £30/t during the past two months due to the prospect of big harvests of oilseed crops in America and continental Europe.

Other groups such as United Oilseeds are looking at this niche area, but it is concerned over volunteer contamination, especially of HEAR varieties in conventional rapeseed for human consumption.

Rob Nightingale, arable manager at Sentry Farming’s Hampshire unit near Petersfield, is growing 200ha of oilseed rape, with about one-third covered by a HEAR variety.

He says Palmedor yields about 10% less than the conventional variety Sesame and has higher seed cost, but he still believes that growing the HEAR variety is worthwhile.

“From a financial point of view, growing the variety is more attractive, and if volunteers do cause a problem we would look at widening the rotation,” he says.

Earn a premium with HEAR varieties