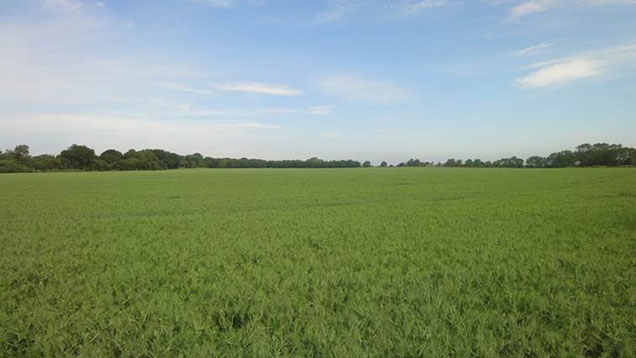 More than 700 acres of prime English farmland is being launched.

The first significant block of Grade 1 silt in the Boston, Lincs, area this year is being sold by tender.

Charlie Bryant from Brown & Co said the 282 acres being sold in two lots at Witham Marsh Farm and School Farm on the outskirts of the town can grow the most demanding crops.

Witham Marsh has about 107 acres in vining peas, but has grown a full range of horticultural crops.

It is irrigated and has an abstraction licence for about 9,000cu m until October 2028.

School Farm is in wheat and has also produced sugar beet and some horticultural crops.

About 240 acres of Kent arable land is being sold near Herne Bay.

Ridgeway Farm’s house and buildings have strong development potential for change of use and so are being lotted separately from the farm’s land.

The retiring sellers have run a combinable crop rotation over the mainly Grade 2 soils with grass leys fitting around wheat and rape.

The launch of 225 acres of principally Grade 2 arable land in Nottinghamshire presents an opportunity to investment buyers, Savills says.

The land at Lound, near Retford, is let on an Agricultural Holdings Act tenancy and is being sold at a guide price of £800,000.