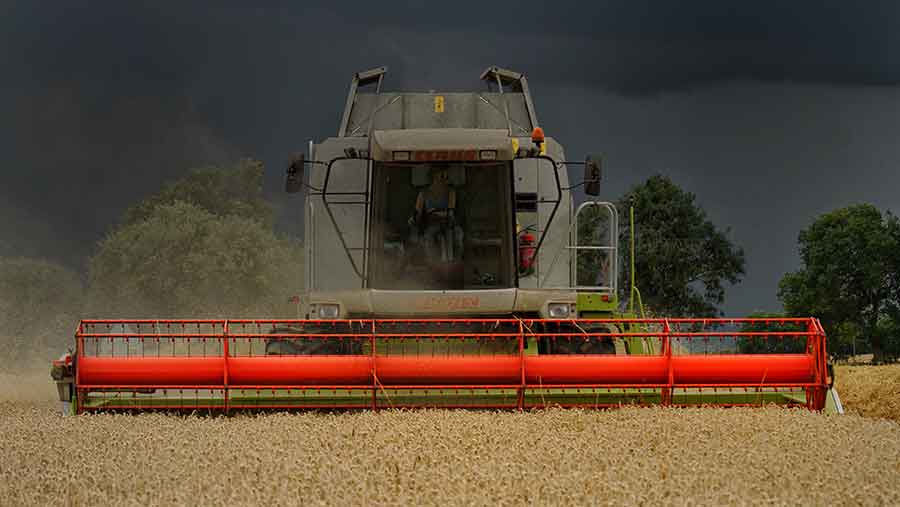 Combines are dodging the showers as harvest in Scotland and the north of England heads into its final few weeks with many traders highlighting quality concerns.

In Scotland, dry weather over the latter half of last week kept combines busy, but wetter conditions this week are delaying the cutting of already ripe crops.

“In the Borders, around 75 to 80% of the spring barley is now cut and we are well through the wheat,” said Bruce Ferguson, managing director of Aberdeen Grain.

“Central Scotland is slightly further behind, but still making progress and in Aberdeenshire we haven’t seen much wheat cut yet,” he added.

Yields across all crops were average but quality was variable, while traders said three or four dry days would enable a lot of progress to be made.

“There is some concern over brackling in Concerto spring barley. Farmers have lost a bit of yield on the floor, and the concern is if we get more wind that will push the crops over further,” said Mr Ferguson.

Further south in Northumberland, two-thirds of the harvest is complete with oilseed rape and winter barley harvest finished, with just some winter wheat and spring barley left to cut.

“Both yields and quality have been reasonable and the weather does not appear to have caused any problems,” said Graham Wyld, chief executive officer at Coastal Grain Marketing.

While this year’s harvest hasn’t produced any standout results – with the exception of good oilseed yields – growers were fairly happy, he added.

“There has been slight disappointment with second wheat yields, but overall there are no particular concerns and most varieties have done reasonably well,” said Mr Wyld.

“It has been one of the better seasons for winter barley and Orwell’s yield of 11.1t/ha is our best performance. Our five-year average is closer to 7.5t/ha – so we will definitely grow it again,” he said.

Heading south into Lincolnshire, Woldgrain was waiting for the final 500t of wheat and barley and 2,000t of beans to reach the store, said laboratory and haulage manager Dan Murphy.

“The biggest challenge this year has been the weather. While oilseed rape and winter barley was hassle free, there have been problems with variable nitrogen levels in spring barley and Hagbergs as low as 90 in Skyfall winter wheat,” he said.

Wheat quality in Herefordshire – particularly milling wheat – had been extremely variable this season, with some low specific weights and also some losses due to the prolonged rain.

“There has been a bit of wheat come in at 69 to 70kg/hl but we have also seen some samples as high as 77kg/hl,” said Dale Payne, managing director at Craven Grain.

“In terms of moisture, 26% has been the wettest but on average, levels are around 18%. Skyfall has really suffered this year in terms of quality – it seems varieties like this aren’t designed to handle the wet weather,” he added.