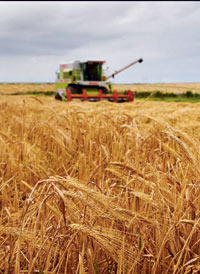 Parts of Scotland recorded more than 60mm of rain in 24 hours early this week, said the Met Office. This came on the back of the wettest August ever in Dumfries and Galloway, with many parts of Scotland, Cumbria and Northern Ireland recording more than twice their normal August rainfall.

In Perthshire, Adrian Ivory had recorded more than six inches of rain since 1 August. “It’s as bad as last year,” he said. “Ground conditions are hellish. We couldn’t see the heads of the barley for a while, but the rivers are subsiding.”

In Clackmannanshire, James Muir had not combined anything in the 10 days to Tuesday (8 September). “The weather is pretty grim; combines are sinking all over the place.” However, a better forecast meant many farmers would be back combining later in the week, with about half of the harvest still to do.

Further north, in Aberdeenshire, Nick Davidson said the floodwater was subsiding quickly. “We had floods as high as I’ve ever seen at this time of year – it was running through our wheat and looked disastrous. But it has dried out quickly and we’ll start getting into the wheat on Wednesday (9 September).”

The biggest downside was the price, he said. “We had the best quality malting barley we’ve ever had, but the merchants are offering just £78/t for it. We shall wait for intervention to open, which equates to £88/t for feed barley.”

In the Scottish borders, better weather was enabling Neil Thomson to push on with combining wheat near Kelso on Wednesday. “We had two inches of rain last week but there’s a bit of a window in the weather so we’re trying to get finished.”

Ireland, Cornwall and Shropshire had been similarly badly affected by the weather – poor yields, high costs and diabolical prices mean many farmers will be making a loss this year. “It’s been pretty disastrous,” said David Riley of Upper Stanway Farm, Ludlow, Shropshire.

However, forecast high pressure meant most farmers would be able to finish on a better note, with many helping neighbours in need of a hand.