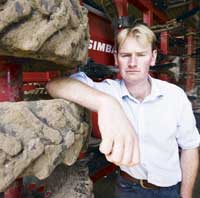 Matching seed rate to potential seed-bed quality is helping to eliminate variation and increase wheat yields on a Suffolk estate.

The results of a field trial using variable seed rates have convinced Sotterley Farms Partnership’s manager Simon Thompson to roll out the precision technology across a greater acreage this autumn.

Not only did the traditionally poorer performing areas of the field produce an additional 2t/ha, there was also a 53% reduction in variation across the whole field. What’s more, this greater consistency was achieved without an increase in the total amount of seed required.

Last year, Mr Thompson took the decision to try varying seed rates according to soil type and likely seed-bed quality in one field. The purchase of a new Horsch Sprinter 6 drill, with the capability of drilling variable rates was a factor in his thought processes, he admits, but so too were the results of previous yield maps.

“We have a mixture of soil types across the estate and yield maps from the previous two harvests confirmed what we already suspected,” he says. “Parts of the farm were producing good yields, but others were less exciting. And that variation was often due to soil type changes within fields.

“On closer inspection, we realised that the heavy clay areas were not giving us the required plant establishment, which was then adversely affecting yields.”

There were other agronomic reasons for the lower yielding areas, he admits, but most of these could be linked to soil type. “Slug problems, for example, were always worse with the heavy clay cap soils. But increasing seed on the better soils would risk lodging and higher disease pressure, so that wasn’t a preferred option.”

Getting a more consistent plant stand, regardless of drilling conditions and soil type, was his aim. With the help of precision farming specialists SOYL, who conducted a detailed conductivity survey of the trial field, a map showing an estimate of plant establishment was produced.

“This map showed that establishment could be as high as 95% on the loamy soils, but as low as 65% on the poorer, heavy soils,” he explains. “And these likely establishment figures correlated with the previous yield maps.”

Once measured, zones of similar conductivity values are formed, so that potential seed rate zones can be drawn up.

“It allows seed rates to be calculated for each zone. Where higher plant losses are anticipated, due to factors such as a higher clay content or stone content, a higher seed can be used to compensate.”

At Sotterley, the field used in the trial was drilled on September 10, with Group 3 wheat Scout at an average seed rate of 140kg/ha. On the lighter land, where 95% establishment was likely, this rate was reduced by 50% to 70kg/ha. In contrast, the heavy clay areas, which were expected to achieve 65% establishment, had the seed rate increased by 50% to 210kg/ha.

These alterations were higher than recommended, but he was keen to test the theory and get a visual impact, by pushing it to the limits.

“It’s important to stress that the same amount of seed was used overall,” continues Mr Thompson. “That’s because less seed was used on the better areas, rather than just using more where a thicker plant stand was required.”

At harvest, the yield map from the combine showed that the experiment had been a success. “Approximately one third of the field had yielded 2t/ha more than usual. That third was the heavy land area, with the clay cap.”

Getting a more even yield across the entire field resulted in a 53% reduction in variation, he adds. “Essentially it allowed us to pull more of the field into the higher yield brackets. The peaks rather than the troughs dominated.”

For those contemplating the use of variable seed rates, a default rate can be set at the start of drilling, with tweaks being made according to the season and local knowledge, he points out. “We are still in control of seed rates, but the precision technology allows us to make changes to it on the move, as soil type alters.”

He adds that soil zoning will be very useful on the farm, as it can be used for other purposes. “We can target other inputs better. Slug pellets and fertiliser are good examples.”

Having an electrical conductivity survey conducted costs £15/ha, with an additional £2.50/ha for getting the data loaded into a digital file, reveals Mr Thompson. “It’s not cheap, but it is a one-off cost, and we hope there will be other benefits to come.”

He plans to drill more of the farm’s winter wheat with variable seed rates this autumn. “Getting a sufficient plant count in the autumn is our goal. It would only take another dry spell, or a coarser seedbed, to affect establishment on the heavy land.”

First wheats form the basis of the rotation at Sotterley Estate, where 1012ha are farmed from its base near Beccles.

Oilseed rape, peas and beans are all grown as break crops, with sugar beet also finding a place on a temporary tonnage basis. Other land, with irrigation facilities, is let for carrot and potato production.

First wheat yields average just under 10t/ha, although Mr Thompson is not anticipating that any records will be broken in 2010.

“Moisture has been limiting this year and we had an exceptionally dry spring,” he points out. “From what we’ve seen so far, I would expect yields to end up at least 1t/ha down.”

All of the oilseed rape had been direct drilled with a subsoiler by the end of the third week in August, so it won’t benefit from variable seed rates in 2011.

“But I can see that we could apply this concept to oilseed rape,” notes Mr Thompson. “It’s a crop which shouldn’t be too thick for best results, but the threat of slugs and pigeons means that we tend to use more rather than less seed to allow for soil type variation.”

Variable seed rates are a natural step for Sotterley Farms Partnership, as the business has already adopted autosteer technology in its drive to raise output, believes Richard Means of Strutt & Parker.

“From the trial results, we can see consistency of yield across the whole field,” he says. “It’s helped to improve the field average and raise the output of that particular field.”