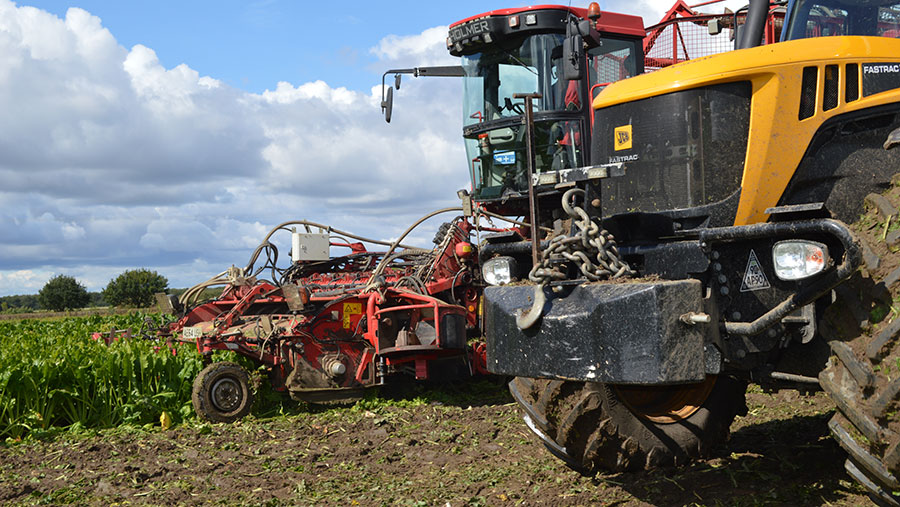 Yields on fertile soils in south Lincolnshire and Norfolk are pushing above 100t/ha, meaning the overall average national yield is set to beat 2014’s record of 80t/ha.

With three-quarters of the crop lifted, Colm McKay, British Sugar’s agriculture director, said many growers are reporting their best-ever yields, while the overall harvest will be just below record levels.

“Field yields will reach a new record above the 80t/ha set in 2014, with the highest factory area being Cantley, setting a record of over 90t/ha,” he told Farmers Weekly.

Cantley, just south-east of Norwich, is the smallest of British Sugar’s four processing plants, which include Wissington in Norfolk, Bury St Edmunds in Suffolk and Newark in Nottingham.

David Hoyles, who farms in south-east Lincolnshire, reported “unbelievable” yields some 20-30% higher than expected on his rich silt soils close to The Wash after lifting about two-thirds of his 60ha crop.

He lifted beet on some heavy land at the start of October which yielded 101t/ha, then another block just before Christmas, which came in at 116t/ha, with his last block due to be lifted in February at Monmouth House, Lutton, near Spalding.

“We had more moisture in August and September than usual and the roots just kept going down to put on more yield,” he said.

Doug Pickup, who grows 260ha of sugar beet between King’s Lynn and Holt in north Norfolk for farming group Sentry, reported some of the best yields he had ever seen with two-thirds of his crop lifted.

“Yields on our light land have done incredible well with yields rising from the very early-lifted crop at 74t/ha up to 102t/ha,” he said.

The farm which yielded the 102t/ha crop had never done more than 90t/ha before, while all the crops gained from a lot of sunlight and  good autumn weather, he added.

With about 85% of his crop lifted on a mixture of Lincolnshire Wold chalky soils and heavier land by the River Humber on the estate owned by Sir Richard Sutton, yields have edged higher.

“With an extended growing season and a good October, the beet has just kept growing,” he said.

Mr McKay said the big crop will mean a long harvesting campaign, which should last until mid-March, to give a crop of 1.38m tonnes of sugar down slightly from an earlier estimate of “in excess of 1.4m tonnes”.

“The dry spring was not ideal, but from May onwards we had excellent moisture levels and good light intensity,” he said.

Mr McKay said many of the 3,500 beet growers are confident about the crop due to high yields and sugar contents, and he expects the areas this spring to be similar or even a touch higher than that planted in 2017.

He said 58% of beet growers are signed up to three-year contracts rather the one-year contracts, and this year’s beet price is set to rise 2.3% to £22.50/t.