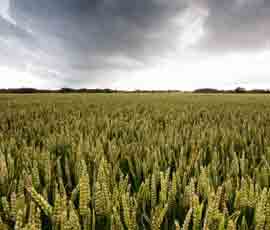 With greater extremes in weather and a rapidly expanding maize area, wheat ear diseases are set to become a rising problem. Adam Clarke finds out what is being done to counter the threat

Scientists at the John Innes Centre are attempting to identify multiple genetic resistances to ear diseases and incorporate them into commercial wheat varieties within the next five years.

Using genetic lines from China, Mexico and elsewhere, a LINK-funded project, using private and public money and involving many breeders, aims to produce varieties resistant to all ear diseases.

Those varieties will significantly reduce the impact of wet summers such as that experienced in 2012, when significant wheat yield and quality was lost across the UK.

Some fungicides have efficacy against ear blight. However, timing is critical and extremely difficult to get right, particularly in a catchy season when there are many rainy days during flowering.

This highlights the importance of varietal resistance to reduce the impact of these diseases, with little hope of new chemistry in the short term.

Ear diseases, such as those caused by fusarium and microdochium species, are predominantly caused when flowering coincides with rainy periods during the early summer.

Paul Nicholson, group leader in cereal diseases at JIC, says: “There are two resistances to ear blight. Type I prevents the initial infection and type II prevents the spread of the fungus within the ear itself.”

Most research work around the world has been focused on type II resistance to the toxin-producing species, such as Fusarium graminearum, which now dominates ear blight populations in the UK.

“However, we are now saying that it is more important to focus on type I resistance to stop the infection in the first place, but it is much more difficult to identify,” adds Dr Nicholson.

Genetic lines from the international maize and wheat improvement centre (CIMMYT) in Mexico, believed to contain the type I gene, have been combined with spring wheat Paragon using conventional breeding techniques.

With genetic markers, Dr Nicholson and his team hope to identify the type I gene from the progeny produced.

It is believed that the type I gene will provide resistance to the initial infection of all types of ear blight pathogen, including microdochium and Fusarium poae that only affect individual spikelets within the ear.

“The advantages would be huge, reducing toxin levels and preventing yield-quality losses. It would also improve seed quality by lowering risk of seedling blights in subsequent crops,” says Dr Nicholson.

Combining type I with the type II genetics from China will have the potential to produce a “super plant”.

“We have combined four genes within the same plant to produce a highly resistant plant, but it produced a very strange phenotype,” explains Dr Nicholson.

“We are getting there, but we need more data to produce a variety that is an attractive starting point for commercial breeders,” he adds.