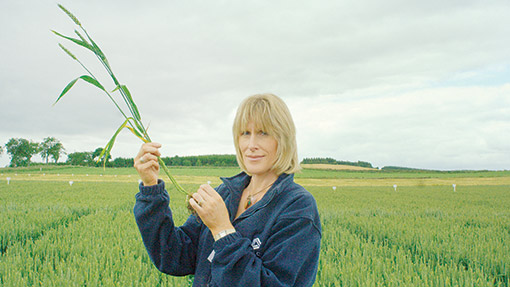 Winter wheat and barley crops in Scotland are emerging from the winter with good yield potential and carrying high levels of disease, making fungicide programmes crucial this year.

An early T0 spray is often omitted on Scottish barley crops, but where there is a high yield potential and disease levels, good responses can be achieved.

“This year we tick both boxes, but the concern is that soils are very wet as you come south from the Aberdeen shore, so crops are almost at the right growth stage now, but fields aren’t passable,” says Dr Burnett.

Growers that aren’t able to apply a holding spray will need a robust T1 spray at growth stage 31, where the greatest response is seen from SDHI chemistry.

Dr Burnett says that the SDHI-containing products have a good winter barley disease control spectrum and give a positive yield response and economic benefit.

“We also have the privilege to use a wide scope of actives in barley, so using SDHIs, triazoles, strobilurins, cyprodinil, specific mildewicides and chlorothalonil can cover all bases and provide a solid resistance management strategy,” she adds.

The leading product in barley is Bayer’s SDHI-triazole formulation Siltra Xpro, but Dr Burnett says all the SDHIs have good activity on the main diseases.

Adexar is close to Siltra Xpro and the straight SDHI products Imtrex, Zulu and Vertisan are too, but offer the flexibility to combine them with prothioconazole.

“They give you the chance to mix those components with the strongest triazole on barley diseases and in our trials that strategy has been close to the efficacy of Siltra,” says Dr Burnett.

Winter wheat is a less widely grown crop than barley north of the border, but growers with the crop in the ground will also need to take care of the high disease pressure already present.

Mildew is less prevalent than on winter barley, but septoria levels are already considerable and yellow rust has crept up as far as Perthshire on susceptible varieties.

“A T0 is likely to be essential this year and with limited spray windows around stem extension (T1), the norm due to catchy weather up here, it will allow better scope to time the T1 spray,” says Dr Burnett.

She adds that because crops are early this year, the gap between the T1 and T2 applications is likely to be longer than usual.

“There will be more interest in SDHIs at the T1 timing to ‘beef up’ disease control, which will help the potentially longer gap and also take advantage of current good potential,” says Dr Burnett.

Her opinion is that there is very little to choose from between Adexar and Aviator, but they give growers a good chance to alternate triazole usage in a fungicide programme.

“Sticking with these balanced, pre-formulated products is a good strategy, but as with barley the straight products Vertisan and Imtrex do perform as well in the right mix, but you must keep the triazole rate up,” she adds.