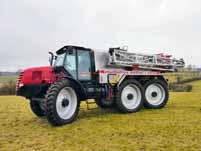 Can crop sprayers ever be big enough? No, judging by the latest self-propelled models to emerge from the workshops of leading manufacturers.

For sheer scale, Multidrive takes the prize with a six-wheel-drive machine that carries no less than 9000 litres of dilute pesticides.

“It was commissioned by an Australian grower who’d unsuccessfully approached a number of manufacturers for a sprayer of this size,” says Chris Kelland of Multidrive. “We said we could do it, put together a specification and the SixTrac is the result.”

Multidrive’s workshops at Birdlip, Gloucestershire, had already turned out a handful of triple-axle versions of its field application tractor for carrot harvesting transportation in Australia. But the weighty demands of carrying a 9000-litre stainless steel tank, plus a 900-litre clean water supply, 24/36m tri-fold boom and all the other necessary equipment meant significant chassis and running gear upgrades were required.

“It now has a 266hp John Deere six-cylinder engine in place of the standard 185hp version, an 11-speed Funk powershift transmission instead of a six-speed ZF auto and air suspension in place of coil springs for the front axle suspension,” explains Mr Kelland. “The six-wheeler already had air bag suspension on the rear axles, but we did strengthen the chassis in places to account for a different way of using the machine.”

The drive-train can be switched between two- and six-wheel drive and two- and four-wheel steering – with the rearmost axle responding with two delay modes – and the load-sensitive suspension is designed to maintain a consistent ride height.

Knight Farm Machinery has moved into new territory with its 5000-litre capacity SP 2050 self-propelled sprayer, available with booms up to 40m.

“It’s an all-new machine running on active self-levelling air suspension with roll stabilisation to improve traction over uneven ground,” says Brian Knight of the Rutland-based company. “The suspension is also designed to give a smooth, comfortable ride on the road for both the operator and spraying equipment.”

Another innovation is the operator’s cab, which is mounted in a forward-control position in common with all UK-built self-propelled sprayers, but mounted on its own air suspension linkage.

“It adds another level of ride comfort to complement the chassis suspension,” says Mr Knight. “Also, locating the fuel tank between the engine and cab helps absorb some of the power unit’s noise and vibration to keep things quiet for the operator.”

Berthoud is expanding its self-propelled range with the Raptor 2540. Nominal capacity is 2500 litres with 24 to 28m Axiale booms.

“The bigger Raptor sprayers have been well received and I think it is a good time to be introducing a similar, but smaller, nimbler machine,” says Martin Shackcloth of Berthoud UK. “It will complement the 3200, 4200 and 5200-litre models.”

Although the newcomer runs on a new chassis, it provides the operator with the same mid-mounted cab as other Raptor sprayers, together with four-wheel drive and a choice of two- or four-wheel steering.

The front-mounted 180hp Deutz diesel powers a 40kph three-speed hydrostatic transmission, with Hydropilot ensuring a constant working speed for consistent application and output without too much operator intervention. Fuel consumption should benefit from achieving nominal output from the Omega twin turbine centrifugal pump at 1600 engine rpm.

Other new developments include hydraulic variable track adjustment for the Berthoud Raptor 3240. The control system includes a dial to select whether to adjust one axle at a time or both simultaneously, and preferred settings for different tramline widths and wheel sizes can be recalled from memory.