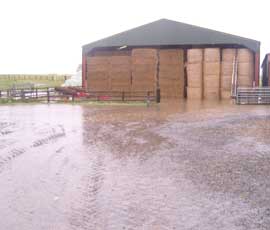 The worst September storm in 30 years is causing serious problems for farmers, whose autumn drilling plans have been wrecked.

Northern England and Scotland have been worst hit, with widespread reports of waterlogged fields of newly sown crops and stranded farm machinery.

More than 300 homes were evacuated across the UK, mostly in the North East, and many roads and rail services have ground to a halt.

Peter Robson, a mixed farmer in Stockton-on-Tees, Cleveland, said many areas had seen a month’s rain in a day.

“We have had 99mm of rainfall since Sunday night. The fields are flooded and there is a lagoon in the farmyard (see picture),” he said on Wednesday (26 September).

“There is widespread flooding on newly sown land that now looks terrible. We were hoping to drill the wheat this week, but we’re looking at a serious delay.

“The livestock is unsettled and the cows are wandering around. They don’t know what to do. It’s desperate.”

Yorkshire NIAB TAG agronomist Julian Thirsk said: “We’ve had 57mm of rainfall in Selby in just a few days. It’s holding us back from drilling.

“Farmers on heavier land are wondering whether they will be able to get on at all. Two farmers, one in Northumberland and another in Sunderland, are already thinking about ordering spring barley seed.

“I’m advising farmers not to force things. It’s better to drill wheat two weeks late rather than maul it in now.”

The Environment Agency had 78 flood warnings and 128 less serious flood alerts in place on Wednesday.

Met Office figures showed it has been Britain’s most intense September storm since 1981.

Since Sunday (23 September), Ravensworth in North Yorkshire has been wettest, recording 131mm of rainfall up to Wednesday – almost three times its September monthly rainfall average of 47mm.

Met Office forecaster Helen Chivers said Wales would see the most rain on Wednesday, between 20-40mm, but elsewhere the rain should be less severe.

“From Friday into the weekend, much of the country will see a mixture of sunshine and showers. The rain should be less intense than of late.”

Drilling plans in chaos after floods

Upload your pictures to our Wet Weather gallery