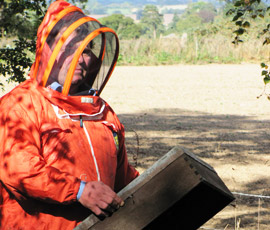 A Shropshire farm has imported £10,000 worth of bees from Italy after losing two-thirds of its stock following months of poor weather.

The Plymouth Estate, at Bromfield, near Ludlow, has lost more than 100 hives in the past 12 months.

But farm owners moved quickly to refill stocks by transporting the bees over to the UK in a lorry. The bees pollinate farm crops and make the honey which is then sold in the farm shop, Ludlow Food Centre (www.ludlowfoodcentre.co.uk).

Richard Lindsey, the farm’s beekeeper, visited the estate on Monday (17 June) and he took the bees to their new hives and let them get settled.

“We introduced thousands of bees to their new home on our estate,” said Tom Hunt, Ludlow Food Centre’s marketing manager.

“Over the last year we have lost 102 of our 150 hives which is extremely sad. To repopulate our hives we have bought bees from Italy.

“The estate have invested in enough bees to repopulate our hives so we can hopefully continue honey production.”

He added: “We very much hope our new bees settle in well and that can look forward to some better weather over the coming weeks and months to give them a chance of making plenty of honey.”

A third of all honeybee colonies were lost over the winter in England following the wettest summer in 100 years, according to a report published last week by the British Beekeepers Association.

The survey of beekeepers said poor weather and habitats were the main culprits for declining bee health and not agrichemicals.