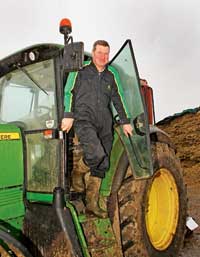 Satellite navigation is not just for tractors working on large-scale arable farms. It has its uses on smaller dairy farms, too, as Andy Collings explains

When fertiliser prices took a mammoth hike a couple of years ago Lancashire farmer Les Hull sat down and did some serious thinking. He knew that to make better use of fertiliser meant he had to apply it more accurately, with less over- and under-lapping and less waste. And that, he concluded, meant investing in a lightbar navigation system.

Based at Winmarleigh, near Garstang, Mr Hull helps to run his family’s dairy farm with its 200 cows and 200 followers. Most of the farm’s 144ha (360 acres) are down to grass, but a small arable area is used to grow about 28ha (70 acres) of forage maize and a similar area of winter wheat.

A strong desire to be in control of most major field operations means the farm is responsible for everything except forage harvesting, for which a contractor is employed. This includes applying fertiliser to all the grassland – including several dressings during the grazing season along with applications both before and after the fields have been cut for silage.

In the past, he has tried establishing tramlines when fields are re-seeded, but they quickly grow over. He has also marked out fields with flags and sticks.

On occasion, he adds, he has even tried guessing the distance between bouts, but the wheel marks were difficult to see and the results were far from satisfactory. Hence the purchase of a basic, no frills navigation system – a simple lightbar tractor guidance kit. 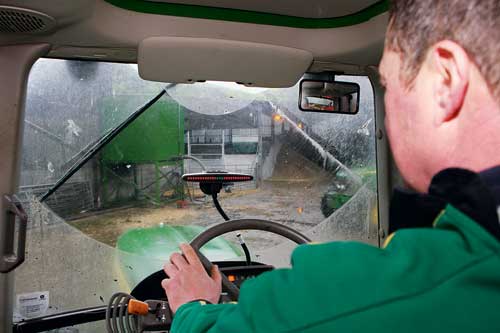 “The more I thought about it, the more convinced I was that it was the right way to go,” he says. “With fertiliser prices being as high as they are, I calculated I would only have to save the value of about three tonnes of it to cover the price of the lightbar system.”

Two years ago a John Deere GreenStar lightbar system, along with the company’s StarFire 300 GPS receiver, arrived at the farm.

Fitting it to the JD 6430 he uses with a KRM fertiliser spreader proved to be a simple operation.

“It may have been simple to set up, but I have to admit, using it to stay on track was initially something of a challenge,” he says.

Guidance comes from the row of lights displayed on the bar – when the tractor is in the right place the lights are central, but should it drift off route the lights to the right or left are illuminated indicating that a correction is required.

“The tendency is to focus too much on the light positions and over correct all the time. But after a little while, steering correction becomes an almost subconscious activity and things become much easier.”

On the downside, he says, headland turns to line up for the next bout are not that easy.

“The lights flash about in all directions when turning and you only know where you should be when you have made the turn into the next bout – which is hopefully somewhere near the mark,” he says.

Even so, Mr Hull reports that fertiliser placement on the grassland – particularly where the grass is taken for silage – has been noticeably improved with fewer misses and overlaps.

“The lightbar system is pretty basic but it serves our needs well,” he says. “Better than that, I should think it’s paid for itself several times over.”