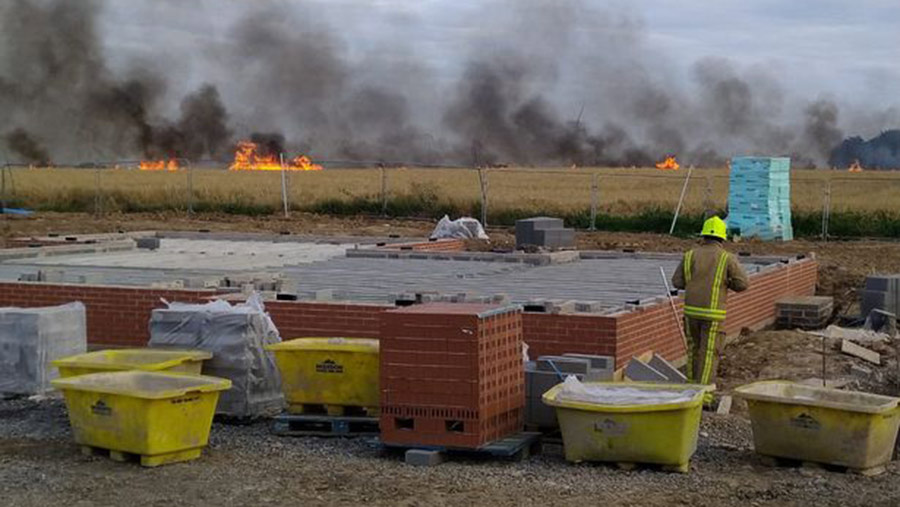 Six teenage boys have been arrested in connection with a large fire that destroyed farmland and crops in north-east Lincolnshire.

Firefighters said about 53ha of barley and surrounding grass and shrubbery was destroyed in the blaze.

Humberside Fire and Rescue Service received multiple calls to the fire, which tore through a field off South Sea Lane, in Cleethorpes, on Monday evening (5 August).

Holidaymakers at nearby holiday park Beachcomber and Thorpe Park holiday resort were evacuated from their mobile homes while the emergency services worked to bring the fire under control.

Fire crews thanked local farmers for rushing to the scene and using machinery to create fire breaks to try to stop the flames from spreading.

One forklift truck which was being used to move hay and barley away from the fire was also destroyed in the blaze.

Farmers Michael Horner and Sons, who own the affected farm, have been assessing the damage while continuing to harvest crops in other fields.

Yasmin-Elizabeth Willerton, whose partner, Jim Horner, works at the farm, said on Facebook that people were looking for answers as to “how anyone can think it’s funny to endanger lives?”.

Ms Willerton posted a couple of videos on her Facebook page showing the flames ripping through the barley crop.

The fire service said six fire engines were sent the scene to tackle the blaze, along with two tactical response vehicles.

A fire service spokesman said a full fire investigation was already under way working with the police and local farmers to establish the most likely cause of the fire.

A Humberside police spokesman said: “We have arrested six teenage boys, from Cleethorpes and Humberston, in connection with a fire which set alight farmland and crops on South Sea Lane in Cleethorpes on Monday evening (5 August).

“If anyone has any information about this fire or saw anything that would help with our enquiries, please call our non-emergency number 101 quoting log 480 05/08/19.”

A combine harvester has been destroyed in a fire at a farm near Bath on Monday evening (5 August).

All 3 pumps from Bath and 1 from @AFRSHicksGate have attended a combine harvester fire. Good early make up en route ensured we didn’t run out of water. #greenwatch #Bath pic.twitter.com/eh1sWQCVSw

Three fire crews from Bath Fire Station, as well as an additional team from Hicks Gate Fire were sent to the scene in Colliers Lane, Newton St Loe, at around 7.45pm.

Firefighters managed to put out the blaze and stop the flames from spreading further afield. The cause of the fire is believed to be accidental.