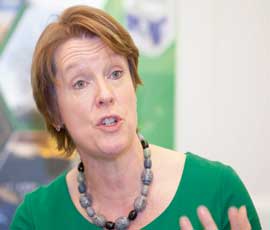 DEFRA minister Caroline Spelman has backed down on demands for a speedy end to direct support payments to farmers.

At a meeting with European farm leaders in Brussels on Tuesday (15 March) Mrs Spelman said she stood by her calls to reduce expenditure on the Common Agricultural Policy.

But during discussions on ensuring the success of CAP reform, she relented on her suggestion to stop direct payments to farmers.

In a letter to EU farm commissioner Dacian Ciolos, the minister said the €55bn (£47.3bn) annual CAP budget could not be immune to finance cuts being felt across the rest of Europe.

She also urged the commission to focus on an eventual phasing-out of subsidies, claiming it was the way to “create resilience and build true competiveness in the sector”.

“[Her decision] makes it possible to find a common approach,” he said.

“These meetings have the objective to turn the dialogue with EU governments from being a problem to being a solution,” he added.

Tuesday’s meeting was one of a series of meetings the agriculture committee is holding with national governments on reform of the CAP.

The committee will also visit the US Congress in June to discuss policy CAP and US Farm Bill reforms, both of which are under way at the same time.