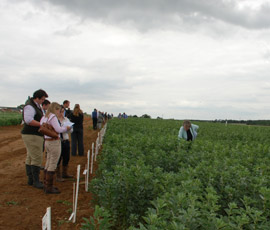 Spring beans could produce the third highest gross margin of all arable crops when attributing the extra boost they give to a following wheat crop.

Mr Vickers said at a PGRO open day that the residual nitrogen that pea and bean crops offer plays a big role in this gross margin gain.

“Pulses leave a residue of between 25-50kg N/ha which is then utilised by the following wheat crop. We always have growers coming up to us and asking why their wheat does so well after a pulse crop,” he said.

Mr Vickers calculated that a pulse crop could be adding an extra £118/ha gross margin to a following wheat crop, and this could put spring beans third in margin terms after oilseed rape and winter wheat.

“This is relevant to all break crops and shows what a vital role they can play while still offering good margins,” he said.

Pulses also require no nitrogen fertiliser as sufficient amounts of the nutrient is fixed from the atmosphere by naturally occurring rhizobium bacteria in root nodules.

Growers can see an array of benefits to the rotation with spring pulses providing a disease break for cereals and oilseed rape, and the added benefit of allowing more time to control blackgrass.

A bigger area of spring pulses is thought to have been sown this season, and PGRO principal technical officer Jim Scrimshaw hopes this will entice more growers to try the crops in 2014.

“We always have growers coming up to us and asking why their wheat does so well after a pulse crop.”
Roger Vickers, chief executive Processors and Growers Research Organisation

“There is no doubting their benefits and if they do well this year, which a lot of them look as if they will, you would hope we would get a similar acreage if not increased next season,” he said.

“The actual overall acreage of pulses this season isn’t likely to have gone up much because growers struggled to get their winter pulse crops in,” he added.

PGRO’s Stephen Belcher pointed out that new high-yielding varieties of spring beans, such as Fanfare and Vertigo, are in their first year of provisional recommendation.

“I expect most growers will go with what they know and it’s probably the right decision. However, there are obviously other options and it will be interesting to see how they get on,” he said.

Fuego and Fury have been the stalwarts in recent years and Mr Belcher expects these varieties to dominate again next year.

He noted that this year many growers have been forced into growing varieties they would probably not have grown in a normal season due to seed availability and weather.

Honey is looking one of the most exciting new varieties for winter beans according to Mr Belcher, who says it could get full recommendation for 2014.

“It is similar to Sultan in terms of being early maturing and has short straw but I would say it is closer to Wizard in seed size,” he said.