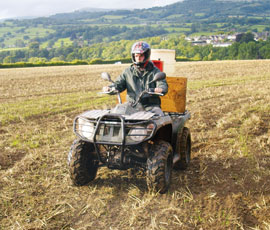 Growers are being urged to rein back on metaldehyde slug pellets or face the prospect that the product will be withdrawn – possibly as soon as next year.

Extreme slug pressure and a wet autumn have raised fears that metaldehyde residues are being washed into watercourses. Maintaining stewardship standards is vital to ensure crops are protected and the product remains available to growers, say industry leaders.

NFU combinable crops chairman Andrew Watts said: “It is probably better to lose a proportion of the crop around the headlands than it is to not have that product at all next year. It is very difficult but it is much better to have the tool [metaldehyde] available in the future.”

Slug pressure remains extremely high this season and some soils have already reached field capacity. The most significant risk of metaldehyde losses into surface waters occurs when field drains are flowing. In these cases, best practice guidelines state that metaldehyde should not be applied.

The Environment Agency said metaldehyde in water did not pose a risk to human health. But higher levels could still put the UK at risk of breaching the requirements of the EU Drinking Water Directive (DWD) and Water Framework Directive, it warned.

Water companies are expected to unveil details of metaldehyde levels in watercourses later this month.

Guidelines suggest aiming for good slug control while keeping crop damage at an acceptable level and using the minimum amount of active ingredient. But it won’t be easy. Paul Fogg, of the Metaldehyde Stewardship Group (MSG), said: “Growers are facing a very difficult task this season.”

Many growers have been calling the MSG hotline enquiring whether the 210g metaldehyde/ha is a statutory requirement or an advisory rate.

“The 210g/ha rate is advisory, but given the pressure this season, growers should be considering the advice as statutory if they want to keep metaldehyde in the armoury,” Dr Fogg explained.

Record rainfall during April and May had coincided with the main slug-breeding season, providing ideal conditions. Weather since had remained favourable for slug survival and breeding, resulting in high populations of both adult slugs and juveniles.

Agrii agronomist David Wild described the slug situation as a “major problem” in Yorkshire and North Lincolnshire. “The big surprise to me is the amount of juvenile slugs – some no bigger than a hat pin – that I am still finding.”

Oilseed rape crops have fared worst of all. Mr Wild said: “Many surviving crops are now starting to grow away from slug damage, but crops have been decimated and in many cases totally wiped out within seven days – even with pellet applications.

“Land conditions are not good, with crops being power harrowed in, and the seed-beds left unrolled and unconsolidated. Some land may have to be left unplanted this autumn. The open seed-beds create problems for both herbicide applications and slug control.”

Video: Tips for beating back slugs