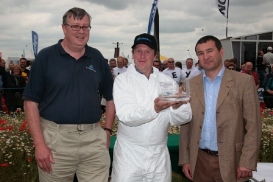 Steve Lake has been named Farm Sprayer Operator of the Year having impressed the judges with his extensive spraying knowledge.

Speaking to Farmers Weekly at Cereals 2011, judge Ted Dredge who himself won the award in 1990 highlighted Mr Lake’s positive attitude on the responsibility of being a modern spray operator.

“They are often under pressure from the weather and heavy work loads, requiring much thought and dedication.”

“His useful aids, which are practical and easy to use, are readily to hand on or around his machine which makes life easier and safer, says Mr Dredge.

Also on the judging panel with Mr Dredge was Clare Blackledge of the Environment Agency.