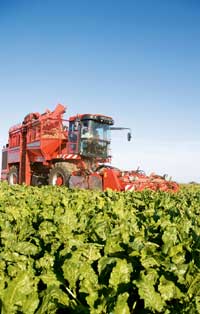 But hard, dry soils are causing some problems for both campaigns and more rain was desperately needed at the start of this week.

Early indications were that beet returns would be high this year, said British Sugar’s Paul Bee. “Sugar content is averaging 19.2% this week, dropping slightly from 19.7% last week. With such high sugars early on, it is likely to be a high-content season.”

But dry weather had made harvest challenging and growers were moving to easier soils or irrigating to soften the ground, he noted.

However, it had been difficult, particularly for growers in the east, he added. “Most are reducing speeds to lower bruising risk and some are irrigating ahead of lifting to soften soils.”

Where irrigation was not possible some growers were forced to stop and wait for rain to soften harder fields, he added.

Low moisture during the growing season meant dry matter contents were high. This would increase bruising risk, particularly for varieties such as Maris Piper, he noted.

“But if we hadn’t irrigated all of our crops, we would have hardly made any progress,” he said.

Bruising had been a problem, he added. “Dry matter is up to 25-26%, compared with 22-23% in a typical year, and we’ve had to vary harvester set-up constantly to minimise bruising.

“Skin quality has generally been good with a small amount of black dot creeping in.”

In Herefordshire, lifting had progressed without irrigation, but soils desperately needed rain, said grower Russell Price. “There has been just enough moisture for us to keep going, but we could really do with half an inch of rain this week to soften things up.”

Several growers in the region had finished when he spoke to Farmers Weekly on Monday but he reckoned he needed another week.

Hard soils and high dry matter content, had made bruising a concern, he said. “We’ve been closely monitoring it and applying water to harvesters and graders to keep skins moist and avoid friction damage.”

Early planted crops achieved high yields, but later crops were more variable, he said. However, average yields were respectable in the high teens/acre, he added.

“Crops matured early enough to get good burn off this year so they should have had time to develop fully.”

Sugar beet harvest in the Cantley factory region was two weeks in on Monday with roughly 7% of the crop lifted, said British Sugar area manager, Stephen Brown. “Sugars are over 20% which is extremely high and yields are averaging 80t/ha.”

But fields were very hard, he said. “Parts are wearing quickly and harvesters are moving very slowly which is pushing up diesel consumption.

“Some growers have been forced to irrigate, where their abstraction licenses haven’t expired, to soften soils,” he said.

“Root breakages are relatively high, but sugar losses are low as most loose crops have been delivered to the factory within 48 hrs.”

Beet grower Robert Law, who supplies the Bury St Edmunds factory, was due to start lifting his 125ha of beet last Wednesday.

But a major factory breakdown meant he was still waiting to go. “We leave the crop in the ground until the factory is ready for it.”

Some growers had managed to get going and reported sugar content at 22%, he said.

“But we’ve only had 3mm rain since 20 August and progress is slow – I know someone who has irrigated with 40mm water to get the crop out of the ground.”

In the Newark factory area, the campaign had been running for four weeks and soil moisture had been less of a problem, said area manager, Shaun Ashfield.

“Soils are hard and people have had to move around to find the softest soils.”

However progress had been good, he said. “Sugars are over 19% and yields are over 70t/ha – all we need is a bit of rain to soften things up.”