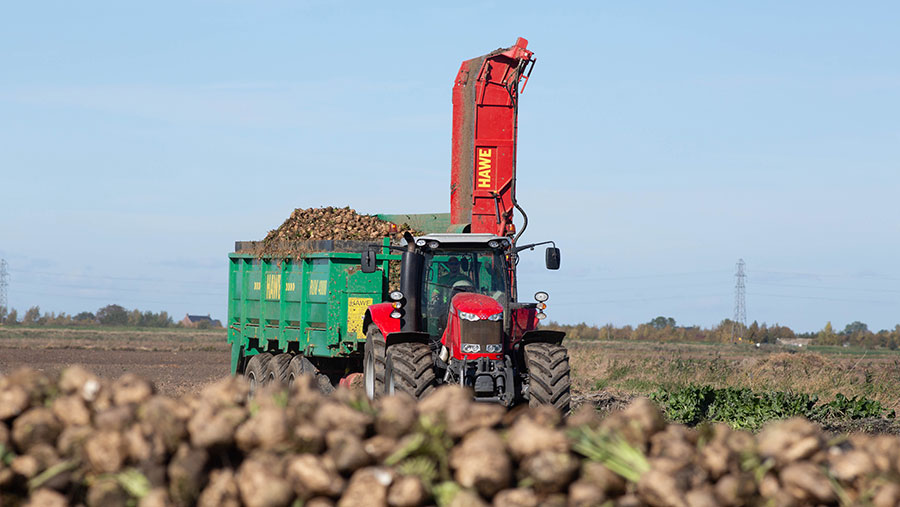 The 2018 sugar beet campaign has started in Lincolnshire with better-than-expected yields considering the shorter growing season and summer drought.

Contractor Richard Ivatt started lifting sugar beet a week ago on 22 September around the Spalding area on medium soils.

So far he has lifted 30ha of his total 1,200ha contracted area, and says beet has been better than he would have expected considering how late the crop was planted this year and the lack of rain.

“Yields are down on last year, but last year was a really good sugar beet year with exceptionally high yields.

“We all knew the yield was going to be down, but I’m surprised it’s not worse than it is,” he said.

However, he added that crops are very variable and will differ from field to field, and depending on the soil type.

“Last year every crop you went into was a very good crop, but the rain has been so localised, crops a few miles apart can be very different,” he said.

One field harvested wasn’t good at all, while another on light brash soils that he was asked to look at wasn’t yet worth lifting.

Meanwhile, another 10ha lifted for a grower has yielded about 81t/ha with a sugar content of 17.4%.

The dry conditions and variability in the size of the beets is also making harvesting difficult, Mr Ivatt said.

“We have had to go slower because it’s dry, and it has been a job setting the topper up as it’s over crowning some and not taking enough [crown] off others.”

Although harvest started a week ago, Mr Ivatt said progress had been slow so far, as most growers want to leave the beet to bulk up a bit. However, he expects the demand for lifting to pick up next week.

British Sugar delayed opening the first of its four sugar beet processing plants – Bury St Edmonds in Suffolk and Wissington in west Norfolk – until this week to allow the beet more time to grow after the difficult summer growing season.