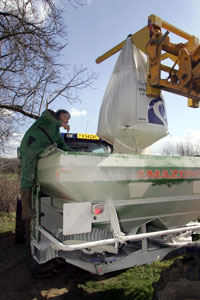 But NFU Scotland has met GrowHow UK’s management for the second time in six months to highlight the punitive effect of fertiliser values on farmers.

NFU Scotland president Jim McLaren said: “We are expecting GrowHow to announce new prices in mid-January for the remainder of the season’s sales. NFUS believes that there is more than enough market justification for this to be close to £250/t.”

NFUS said global commodity prices of ammonia, urea and natural gas had fallen dramatically, but the price of 34.5% ammonium nitrate fertiliser remained “stubbornly” at about £385/t.

GrowHow UK commercial director David Stacey said this did not mean a return to production of cheap fertiliser and that the situation facing manufacturers was difficult. “The world ammonia price has collapsed to below the cost of producing it. There are major ammonia plants closing around the world and stocks of ammonia are rapidly being used up. GrowHow UK is not producing ammonia from its Billingham site from today.”

Among the biggest users of ammonia were polyurethrane industries, which were being hit hard by the economic downturn, Mr Stacey said. But, above all, he expected demand for nitrogen fertiliser to be down significantly, with phosphate and potash even more as farmers reacted to wheat prices of £90/t. Supply would have to be geared to meet this level of demand, suggesting prices could remain firm, he added.

“We’ve got production capacity to meet demand for our products for the rest of this season [until May]. But we can quickly increase our production to meet any additional demand. But it would be commercial suicide to stockpile product at what are still high production costs.” GrowHow reckoned about 80% of farmers’ nitrogen requirements had already been bought, he added.

Farmers Weekly has also recevied reports of 34.5% ammonium nitrate being offered to a British farming company at just £140/t in Ukraine.

But there were no prospects of UK farmers being able to tap into this market, said NFU inputs adviser Hannah Moule. “I wouldn’t imagine that it is of fantastic quality and, as the Ukraine lies outside the EU, they can purchase gas for about a tenth of what it costs manufacturers here.

“There would also be significant anti-dumping tariffs to pay were this fertiliser to enter the EU. There are anecdotal reports of available supplies of AN on the Continent, but it’s difficult to tell we’ll have to wait until January or February to see what impact this could have on prices.