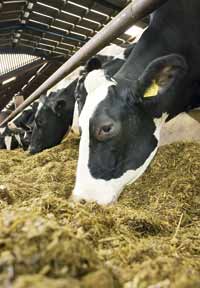 Supplying forage maize with nutrients above the RB209 recommended levels will have no benefit on yield and may have environmental implications, according to Northern Irish research.

Contrary to popular belief, trials by Agri-Food and Biosciences Institute (AFBI) have shown maize does not have a greater need for nitrogen than other cereal crops.

And supplying excess nitrogen, above plant requirements does not result in higher yields, says the Department of Agriculture and Rural Development (DARD).

“Due to the high yield potential of maize, it has generally been assumed high nitrogen application levels are essential, and for this reason, RB209 recommendations have been viewed with a degree of scepticism,” explains DARD.

However, evidence from AFBI research contradicts this belief – in fact crop analysis showed most crops had excessive nitrogen concentrations and levels were significantly above crop requirements.

“This excessive fertiliser application represents an unnecessary cost against what is already an expensive crop, and may lead to environmental problems.”

Trials on ten farms throughout Northern Ireland showed there was no improvement in either yield of quality by the over application of nitrogen, phosphate or potash, compared to RB209 recommendations.