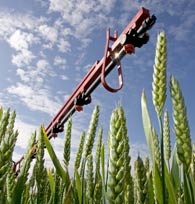 Adding Amistar Opti to a fusarium-active triazole at T3 will help to cover all the disease and quality risks associated with the ear spray timing, claims Dave Ranner of Syngenta.

Both foliar and ear disease control, together with grain quality issues, need to be considered as the T3 timing approaches, he urges.

“The last two years have shown what can happen as the season progresses,” he says. “In 2007, brown rust was a major problem on many farms; last year all the focus was on fusarium and mycotoxins.”

With this in mind, he advises cereal growers to work on the basis that a T3 spray is essential and to consider employing a range of active ingredients to cover all the risks.

Reported shifts in triazole sensitivity are a further issue, he believes. “It makes sense to mix alternative modes of action, especially where it’s cost-effective to do so. The chlorothalonil component of Amistar Opti will help with this.”

The use of Amistar at T3 is well accepted, notes Mr Ranner. “It works well on ear diseases and provides rust control. A 0.3t/ha yield benefit and additional point in grain specific weight have been recorded.”

Using Amistar Opti instead improves the control of ear diseases, strengthens activity on septoria and brings in another mode of action, without adding to the overall cost of the ear spray, he suggests.

“It’s very good value for money. You get 50% more strobilurin than with other products and the chlorothalonil is supplied free of charge.”

Mr Ranner reminds growers concerned about mycotoxins that fungicides are only a small part of their management. “The weather, cultivations strategy, rotation and harvest conditions also play a role.”

His T3 recommendation is to use one of the fusarium active triazoles at half to three-quarters rate, adding 0.75-1.0 litre of Amistar Opti.

“It’s a cost-effective way of covering all the bases. At this stage, we don’t know what the disease situation will be – the long range weather forecast indicates that brown rust could be the main problem. If that’s the case, a strobilurin will be needed.”

Of the six potential disease threats at T3, a strobilurin helps on all except fusarium, concludes Mr Ranner. “Growers need to think a bit wider than fusarium and mycotoxins.”