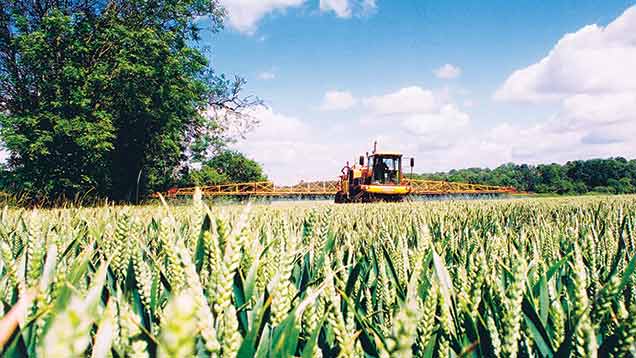 Getting grain protein content to reach the required 13% level for most milling contracts proved to be difficult last year.

According to HGCA’s Cereals Quality Survey, the average protein content was just 11.3% in 2014, some way below the three-year average of 12%.

In total, just 12% of the wheat samples tested met the three parameters of the high-quality bread wheat specification, with just 16% hitting the 13% protein mark.

So what went wrong? Was it due to seasonal effects? Or did growers simply fail to apply enough nitrogen, in a year that produced some very high yields?

And will the arrival of new, higher-yielding, Group 1 varieties mean growers will have to change their approach to nitrogen use? If so, by how much?

Ian Matts, company agronomist with Yara, believes it is important to get the optimum amount of nitrogen right for yield first, before focussing on protein.

“Last year was an anomaly,” he recalls. “We had a warm, wet winter, followed by very good growing conditions. In those situations, you get higher nitrogen mineralisation rates and the efficiency of fertiliser use can be above the industry standard figure of 60%.”

Even where some crops received a total of 340kg/ha of nitrogen, protein content still proved to be elusive, he says. “It seems as though the plant continued to use the nitrogen for growth, rather than translocating it up to the grain.”

“The fertiliser bag is not the only source of nitrogen. The soil’s contribution is a big unknown and it can have a huge effect on the final results”
Ian Matts, Yara

While he suspects that yield was achieved at the expense of protein last year, he stresses that growers are dealing with biology, not physics, when it comes to calculating requirements.

“Monitoring the crop during the growing season is essential,” he says. “The fertiliser bag is not the only source of nitrogen. The soil’s contribution is a big unknown and it can have a huge effect on the final results.”

For the past 10 years, the average optimum for wheat has been 225kg/ha of nitrogen, says Mr Matts. “So it would be sensible to have that as your target at the start of the season. Then, by monitoring crops and making best use of testing, you can alter that accordingly. An extra 40-60kg is usually required for quality wheats.”

Testing comes in various forms, he says. “It can be done by leaf analysis, or with a hand-held tool such as the N Tester. Visual assessments can also be effective.”

Where test results show there is 4-4.5% nitrogen in the flag leaf, that should be sufficient and indicates that everything is on course, he advises.

However, the N Tester only gives a measure of the nitrogen found in the leaf, rather than what will be required for the end market. “It is a tool for yield at the moment,” he admits. “It gives the same sort of reading as a tissue test, but you get the results immediately, not three to four days later.”

Typically, protein levels can be increased by 1% from a well-timed application of foliar nitrogen, made to the crop between growth stages 69-75, recommends Mr Matts.

“There are some contracts, such as Warburtons, where you are not allowed to use foliar nitrogen,” he acknowledges. “But otherwise, it is an important application on milling wheat.”

Foliar applications help to avoid uptake problems caused by dry weather, as they are targeted to the leaf, he points out.

They also coincide with the crop’s inbuilt redistribution of nitrogen, which takes place at grain fill, usually at the end of June.

“With Nufol, an application of 200 litres/ha will supply the crop with 40kg of nitrogen. In a high-yielding situation, where you need more than that, consider two applications, each supplying 30kg.”

Group 1 Trinity may require 40kg/ha of N more than that normally applied.

Chris Bean, Zantra’s technical director, has a suspicion that the new milling varieties will need more nitrogen than most growers are used to applying.

“To get 13% protein in a 10t/ha crop, it is probably going to be close to 300kg/ha,” he suggests. “We did some trials last year, which included Skyfall, and we had to throw the kitchen sink at it.”

That 300kg/ha figure comes from the use of 260kg/ha of bagged nitrogen, followed by 40kg/ha on the ear, explains Mr Bean.

“In all cases, this extra 40kg of nitrogen raised the protein. The average increase was 0.78%.”

The issue for many is that if you are growing the wheat on a Warburtons contract – which asks for 12.5% protein – you can’t use any nitrogen after GS59, or ear emergence, he warns.

“It’s going to be a challenge. These crops can only be treated with additional bagged nitrogen up to flag leaf emerged.”

In the Zantra trials, all four of the Group 1 varieties tested had 40kg of nitrogen applied on the ear, he reveals. “Where we didn’t make that later foliar application, none of the varieties achieved 12.5% protein. So we are facing some uncertainty.”

As Skyfall is a popular variety choice this year, Mr Bean is considering how to replace that 40kg on the ear. “We’re trying rates of 285-300kg/ha of bagged nitrogen, to see if that works. But even Solstice, which is easier to get protein into, needed close to 300kg/ha on nitrogen-hungry soils last year.”

While the site and yield potential of the crop have a bearing, there is more to learn about different varieties, he believes.

“We simply don’t know Skyfall well enough yet. There will be a trigger point when it stops using nitrogen for yield and turns it into grain protein.”

In the meantime, he wonders whether Skyfall might do better as a second wheat, or on less fertile soils, where yield is limited. “Then you can be more certain about getting the protein level up.”

With that in mind, growers moving away from Solstice could put Crusoe into the higher-yielding fields instead, he adds. “It is more reliable as far as protein is concerned.”

Another suggestion is to include a strobilurin with the T2 fungicide, as it helps the plant to capture nitrogen from the soil. “There’s plenty of evidence to show that adding a strobilurin will raise proteins, by around 0.2%. If it’s combined with a late foliar application, the protein uplift is close to 1%.”

Work with N Boost, a stabilised nitrogen and calcium liquid product, indicates that it could be an alternative to urea, he reports. “On average, it gave a 0.5% increase. And the formulation means that you can go on a bit earlier with it.”

While the extra fertiliser increased the costs associated with growing the high-yielding variety by £38.40/ha, it also ensured that both yield and protein targets were met.

As a result, the final gross margin for the 10.8t/ha crop of Trinity was £138/ha higher than that of the farm’s established milling variety, Gallant, which averaged 9.5t/ha.

Farm manager Paul Norman admits that it can be a struggle to achieve top proteins at Streetly Hall Estate, with the business often having to accept £2-3/t deductions for proteins in the high 12%, rather than to keep pushing for 13%.

“Our normal approach is to make sure the milling wheats get an extra 40kg/ha of bagged nitrogen at flag leaf emergence, with liquid nitrogen then being applied on the ear,” he says.

However, he maintains some flexibility in his approach, having grown different varieties over the years across a range of soil types. “The end market also has an influence on what we can do with nitrogen, as does the fact that we are in an NVZ [nitrate vulnerable zone].”

The chance to try some Trinity in autumn 2013, before it was recommended, was too good to refuse, says Mr Norman.

“This new type of milling variety, which offers both yield and quality, is of interest,” he says. “They take some of the risk out of growing milling wheats, as they bring more marketing flexibility. Their better disease resistance is also useful in the current climate.”

Gallant has been his mainstay milling variety for the past six years and has performed very well. In the first wheat position, it has yielded more than 10t/ha, while its earliness has made it a very good entry for oilseed rape.

“Consistency is important in any variety we grow,” he says. “We know the newer milling varieties such as Trinity and Skyfall tend to have lower proteins, so we will have to manage them with that in mind. If the additional expense can be justified, we will proceed – our policy is to grow higher-quality grain.”

Previous experience with Malacca taught him that some varieties have to be fed for yield, as well as for protein. “It was similar in that it could produce both, providing the agronomy was right.”

Last year, both his Gallant and KWS Trinity crops received a total of 300kg/ha of nitrogen. The difference between the management of the two came at the milky ripe stage, when the foliar nitrogen was due to be applied.

A green grain test, conducted with the help of Camgrain, showed the Trinity would need more than the planned 40kg/ha to make the grade for milling. So the rates were tweaked accordingly, using the rule of thumb that 40kg/ha of foliar nitrogen boosts protein by 0.5%.

“A final yield of 10.8t/ha, together with 13% grain protein, was a good result,” says Mr Norman. “We’re growing it again this year, to see if we can repeat that level of performance.”