Forward-thinking family farms that have joined forces with like-minded individuals to cut costs are set to reap the benefits over the next couple of years, predicts Gary Markham, director of agriculture at accountant Grant Thornton.

While the average arable farm net income is set to rise to £242/ha in 2011, the top 25% will be banking £613/ha, he predicts. “And we are not talking about big corporate farms when we look at this top quartile,” Mr Markham explains.

“These figures are based on management farm accounts and illustrate very clearly how the most progressive family farms are restructuring, joining forces to create 4000-10,000 acre businesses that can really motor ahead.”

The numbers stem from the firm’s latest farm business survey, using accounts from the 2009-10 financial year gleaned from Grant Thornton clients, farming a total of more than 100,000 acres in central, eastern and southern England.

The survey reveals that the average arable farm, consisting of 387ha arable and a further 40ha dedicated to non-dairy livestock plus a further 74 contracted hectares, made a net farm income of just £158/ha in the 2009 harvest year (see graph). That was £89/ha lower than the previous year.

“2009 was a year of high inputs – the price of fertiliser doubled in many cases and agrochemicals cost more. At the same time, grain prices were pretty mediocre, averaging just over £105/t,” says Mr Markham. “Of course, these figures are now somewhat historic, so we have projected them forward to try to see where these businesses might be in a couple of years.”

For the 2010 harvest year, output is based on an average wheat yield of 3.06t/acre using the most up-to date ADAS information, and a grain value of £130/t. “Many businesses sold forward before prices reached their peak this season,” says Mr Markham.

Wheat accounts for 51% of the cropped area so has the highest impact on profitability. However, similar predictions have been made for oilseed rape and beans.

All costs are based on the 2009 farm business survey numbers, but adjusted for inflation as set out in the latest Anglia Farmers agricultural inflation report. These showed that farming inputs rose by 5.27% on average between 2009 and 2010, ranging from -4.5% for seed to 13.5% for fertiliser.

The same figures are used to extrapolate to 2011. “Inflation values for each input won’t be exactly the same, but overall we don’t expect the average to be too far out. However, farmers need to keep a close eye on fertiliser, fuel and machinery – these are the big-ticket items.”

Fertiliser especially has proved very volatile in recent years. Anglia Farmers’ figures show average prices shot up in 2008 by 156% to £290/t, then fell 51% the following year, before staging something of a comeback this year, rising to £162/t.

“Anything linked to the price of energy is likely to be volatile – we can expect agchems to start rising again, and fuel is becoming established as a major input, rising 12% last year to almost £30/acre. A 3000-acre farm could soon be facing an annual six-figure bill.”

Machinery costs are also set to continue their upward trend. Anglia Farmers’ figures show they rose about 6% over each of the past four years bar 2008, when they jumped 23%. Like all commodities, metal is in strong demand from developing countries and prices show no sign of abating, says Mr Markham.

Projecting forward on this basis shows that the income range for the different groups widens markedly during 2010 and 2011 (see graph). The top quartile is predicted to generate an extra £420/ha by 2011 compared with 2009, but the average group just £84/ha more.

The bottom group will earn an extra £104/ha, though this will still leave it making a loss of £20/ha.

“Over the past couple of decades, the income range between the top and bottom performers has been fairly consistent, at least as far as 2007. But the difference over the next couple of years looks likely to be bigger than ever – the top and bottom lines of the graph are fanning out significantly.”

Mr Markham is convinced this pattern will continue, with the top 25%’s net farm income continuing to pull away. “The blueprint for this group’s success has been their willingness to get together with like-minded individuals in joint ventures or share-farming agreements, on an equal-standing basis.

“These are mainly family farms getting together to secure a profitable future. They can bulk buy agchems and diesel, share machinery and share-farm crops, bouncing ideas off each other as they go.

“Most of these top 25% businesses will also be paying for good advice. They use independent agronomists and pay by the acre – and many of the farmers involved in the businesses will be BASIS qualified so they can challenge their agronomists and make sure they are getting the best out of them. This means they continue to achieve slightly better yields, which goes straight on to the bottom line.

“Overall, this is a very powerful business formula, and we have customers queuing up to get involved in these sorts of agreements.”

Interestingly, when the single farm payment is removed, only the top 25% made a positive net farm income in 2009, and the same is true for 2011, despite the big rise in commodity values. However, Mr Markham believes some sort of single farm payment, of similar value, will continue to appear on the books. “It will continue to play a key socio-economic role in the future, helping to keep families in farms who will spend their money in local communities.”

If that vision is borne out, 75% of his clients should be able to weather any crash in fortunes that might lie around the corner. But many in the bottom 25% would struggle, given that even in the predicted good times of 2011 the group is predicted to stay in the red when the single farm payment is included.

“Not all farmers are chasing top profits and for some, lifestyle is as important a driver. But how long some in this group can continue making a loss, especially when they are doing so even when times are good, remains to be seen.” 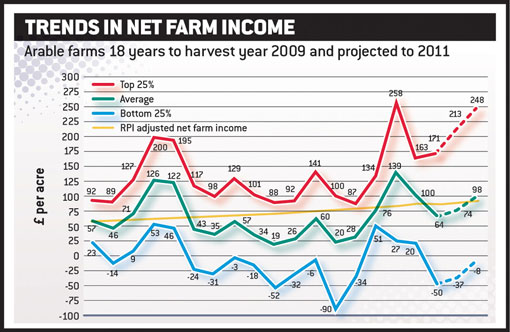 Despite the marked improvement forecast for net farm incomes, the average farmer will be no better off in real terms in 2011 than in 1992, when the farm business survey was first carried out.

“The net farm income in that first year was £57/acre,” says Mr Markham. “Applying the Retail Price Index right the way through shows that in today’s money that would be worth £98, which is exactly what we are predicting the average group will make.”

The bottom group would have to earn £99/ha in 2011 to maintain the same standard of living, but stands to lose £20/ha.