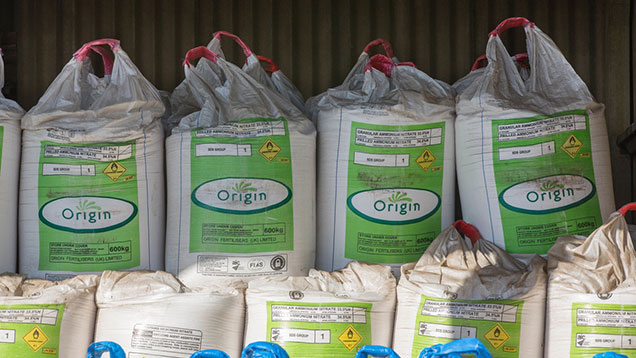 A new five point security plan has been launched to help farmers keep their fertiliser safe and out of the hands of potential terrorists.

Large amounts of fertiliser are currently being delivered to farms across the UK and experts are urging growers to be aware of the threat and to keep their stocks secure.

Recent global events have raised the UK threat level from international terrorism to “severe – an attack is highly likely”.

2. Wherever possible keep in a secure area such as a building or sheeted away from public view

3. Carry out regular stock check and report any loss to the Police immediately (call 101)

5. Remember it is illegal to sell ammonium nitrate without the correct documentation.

“It is hoped that by following this advice we will prevent and restrict the availability of fertilisers for use by terrorist groups in the UK,” he said.

The plan suggests storing fertiliser in an enclosed secure building or covering it with a tarpaulin in an open-sided barn is an effective way of boosting security.

Meanwhile growers are advised to carry out regular stock checks and report any loss to the Police immediately.

Over 90% of terrorist attacks in the UK have used Home Made Explosives (HMEs) with relatively small quantities of ammonium nitrate fertiliser based explosives able to cause great deal of destruction.

Small devices  of less than 50kg have caused fatalities, injuries and substantial damage meaning security is crucial at all levels of storage.