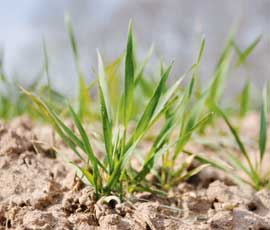 New research has shown that potassium and magnesium are linked to the efficiency of water use in plants, according to fertiliser company K+S KALI.

Work carried out by the company across Europe on the role of potassium and magnesium has shown that both nutrients have a role in improving the water storage capacity of soils, increasing root growth and better assimilate transport in the plant.

Against a background of climate change, unpredictable rainfall distribution and potential water shortages, the results are very relevant to the drought stress conditions experienced in 2011 and likely to be repeated in some areas this coming season, claims the company.

“Our trials have shown that you can’t replace water with nutrients, but that nutrients can help plants cope with dry conditions,” says Andreas Gransee, head of applied research and agronomy at K+S KALI.

“What this means in practice is that in dry conditions, as experienced last spring, nutrients become more important,” he explains. “And although results vary with the timing of the drought, there is always a greater yield effect of both potassium and magnesium in a dry year.”

Where there’s a deficiency of potassium and magnesium, sugars accumulate in the leaves before the classic chlorosis symptoms are evident, he continues. “They can’t get from the leaves to the other organs. This then means that the roots are unable to take up enough nutrients and water from the soil.”

Yield effects of both nutrients have been recorded in spring and winter barley, sugar beet, grain maize and triticale to date, he reports. “Without fertiliser applications, there have been dramatic differences seen.”

Prof Gransee adds that long term studies have shown that potash improves the water storage capacity of soil. “We’ve seen the effect in both light, sandy soils and heavy, clay loam soils. The reason is that potassium helps with the formation of medium sized soil pores, which are better at holding water.”

As a result, more water is potentially available to plants, he continues. “The soil becomes more porous and less water is lost through drainage.”

There is also a close correlation between potassium and soil shear strength, he notes. “There’s a benefit to soil structure and it is less prone to compaction and other problems.”

Studies to see if plants can take up the additional water held by the soil have been conducted by K+S, confirms Prof Gransee.

“In sugar beet, we recorded an increase in the rooting zone of 10cm and better use of water by the crop,” he says. “This translated to a 15% increase in sugar yield, using 14% less water.”

Enhanced root development is a major factor in this process, he ends. “But we’ve also seen a slightly lower transpiration rate when there’s enough potassium and magnesium.”

Implications for the UK

Whether or not 2011 was a one-off in terms of drought stress, there’s no denying that the potash index of UK soils is falling, warns Jerry McHoul of K+S UK & Eire.

“There’s been an increase in the number of soils that are below the target index of 2. Around 30% of soils are beneath this level and, as a result, at more risk from drought.”

The effects of potassium on soil structure are clear in both sandy and clay soils, he continues. “Greater stability from capping, slumping and erosion and additional water capacity have all been recorded in light soils, while heavy soils become easier to work. Silty soils, however, show no consistent effect.”

In addition, the biggest responses to magnesium have come in dry years, he reports. “The average yield response is 0.25t/ha, but in dry seasons it is closer to 0.5t/ha.”

While it is not always economic to get the soil potash index up on light, sandy soils, Mr McHoul’s advice is to always put back what the crop is taking off. “And use rotational applications to apply for the most responsive crops, such as roots.”

A 10mm increase in the water holding capacity of soil is equivalent to 100cu m of water/ha, calculates Mr McHoul.