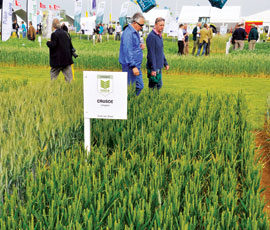 Warburtons has accepted two new varieties onto its list of milling wheats that meet the baker’s required standard a year before they are expected to appear on the HGCA Recommended List.

“We wouldn’t be sticking our neck out on these varieties if we weren’t excited about their potential to replace the older varieties,” said Warburton purchasing director Bob Beard at Cereals 2011.

Contracts for Edgar and Crusoe grown for 2012 harvest are available exclusively through Openfield. The required spec is slightly lower than the usual milling contract at 12.5% protein, 225 Hagberg, reflecting Warburtons’ confidence in their baking performance.

But they will attract the full milling premium, confirmed Openfield group commercial director Graham Lacey. “It’s a credit to the partnership we have built up over the years that we are now able to accept a lower specification,” he commented.

2012 will be the first commercial year for the varieties – 8-900 tonnes of Crusoe and around 200 tonnes of Edgar will be available. Growers commit to a five-year contract with Warburtons and Mr Lacey confirmed that some had already placed orders for the new seed. It is expected the new varieties will fulfil around 25% of the 175,000 tonnes the family-owned baker will source from UK farms in 2012.