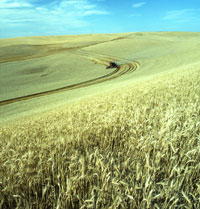 pic US farmer or US flag

American farmers and ranchers have been warned that their incomes are likely to fall this year, after a record high in 2008, as the pressure on world commodity prices continues.

“Last year was a good year for US farms,” he said. “But declining prices cloud the 2009 horizon and volatility is still there.”

The only demand increase would be corn used for ethanol production, he said. In 2008, 30% percent of total US corn production went to ethanol, and this is expected to climb to 34% in 2009. But prices would still be down this year, as they would for soybeans.

Livestock farmers were also told to brace themselves for a difficult 2009. While they might benefit from lower feed costs this year, the recession would continue to hit demand, warned Chris Hurt of Purdue University, Arizona, especially for beef.

Beef prices had risen 150% more than pork prices since 200, and consumers were rapidly switching to lower end cuts and white meat, said Prof Hurt. For the cattle industry to make any profit at all in 2009, supplies would have to decline.

“The health of the livestock industry is linked to the health of the broader economy and producers of beef, hogs and chicken will have to wait for the global recession to end before they can expect any significant price improvement,” he said.

About the only bright spot, according to Mr Sullivan, was that fertiliser prices were coming down from last summer’s record highs. Continued price softening is expected, and Mr Sullivan encouraged farmers to delay their fertiliser purchases.