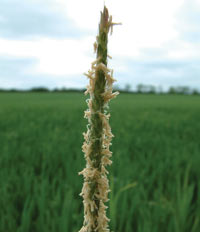 It means making better use of crop competitiveness, and increasing seed rates could be increasingly important to help raise levels of blackgrass control, suggests Keith Norman, technical director of Velcourt.

Both measures also have a part to play in maintaining the usefulness of current herbicide choices, he adds.

“Whether we like it or not, herbicide resistance is happening and the efficacy of some herbicides in the field has already been reduced.

“The focus now has to be on making better spray applications, whether at the pre- or post-emergence stage, and getting the most from cultural control techniques. We need to protect products such as Atlantis.”

Stephen Moss of Rothamsted Research agrees. “Blackgrass control isn’t going to get any easier. And this coming spring, after such a wet and disrupted autumn when many farmers could not apply pre- and early post-emergence products, getting the best from spring applications will be critical.

“Looking ahead to next autumn, growers should be doing everything they can do to take the pressure off Atlantis and other grass weed chemical choices.”

Variety choice can have an influence, although used in isolation the effect will be small, both men believe.

“Opting for a leafy, high leaf area index type, which is more competitive, can help reduce blackgrass numbers,” says Mr Norman. “A good example of this type is Robigus, which has wide leaves and tillers well.”

The contrast is a variety such as Cordiale, with its more upright, shy growth habit and fewer tillers, he continues. “This type is less competitive, which can work in the weed’s favour.”

Growers can get as much as a 50% reduction in blackgrass seed return from drilling a more competitive variety, confirms Dr Moss. “This is a difficult concept to get across as on its own. It won’t help enormously, but used in conjunction with other measures, makes a valuable contribution.”

The problem is that information on the competitive ability of varieties is not widely available, they admit. “You have to use a degree of logic,” says Mr Norman. “The well-tillered, leafier types will be better. Xi19, Robigus and Oakley seem to be good choices, while Hereward and Cordiale may not be.”

Adjusting seed rate is another useful technique. “This is an easy form of cultural control,” notes Dr Moss. “Using a higher seed rate will make the crop more competitive. Again, studies point to up to a 50% reduction in blackgrass numbers where this is done.”

However, there is a cut-off point with seed rate, he warns. “There tends to be less advantage to weed control as you go above 250-300 plants/m². It’s the very low wheat densities of 125 or less that are particularly vulnerable. At very low seed rates, the potential yield penalties from blackgrass competition are much higher.”

The flipside of higher seed rates is additional cost, warns Mr Norman. “There are other considerations such as increasing lodging and disease risk at higher plant populations. And these tend to involve extra crop expenditure.”

“We know that herbicides are affected by resistance, poor application techniques and antagonism with other chemicals,” he says. “There are things that can be done to address all of these, but they require careful consideration before applications are made.”

Part of Velcourt’s stand at Cereals 2009 will give a demonstration of the effects of variety, seed rate and nozzle choice on blackgrass control.

Cordiale and Robigus will be compared at two different seed rates, showing the effects of pre-emergence Liberator and post-emergence Atlantis applications on black-grass control.

Flat fan, bubblejet and Hawk nozzles will also be compared, as differences can be distinguished even at the pre-emergence level, says Mr Norman.

“The angled Hawk nozzle seems best for pre-emergence applications to cloddy seedbeds, while the flat-fan nozzle gives a good misting effect for post-emergence sprays. The bubblejet nozzle appears less good for these situations.”