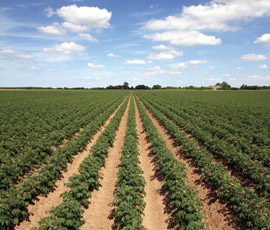 While the technology was available to measure variations in soil potash levels, there wasn’t enough understanding of the relationship between potash applications and yield responses, Marc Allison said.

“The relationship between soil potassium and yield is imprecise, yet we want to use precision farming to improve our inputs.

“Until we have a better understanding of how crops respond to changes in inputs, we are not going to be able to use this technology as well as we could.”

He illustrated his point using a hypothetical crop of potatoes on a field where the variation in soil potassium had been measured at Broom’s Barn research station.

Using published relationships between yield loss and soil K levels, and how much fertiliser should be applied to change soil K levels to 160mg/litre where there would be no response to potash, he showed that while there was a benefit to applying K, the benefits from applying K at small scales, such as in 25m x 25m blocks, were only marginally better than applying on whole or half field scales.

“Those benefits are unlikely to justify the increased costs associated with soil sampling, analysis and variable rate spreading.”

The limitations pointed out by Dr Allison were not directly associated with precision farming, but more about whether the nutrient recommendations were correct, Simon Griffin, technical manager for precision farming firm, SOYL, said.

“There has been a fair bit of research, so we should be somewhere down the line of getting it right,” he believed.

“Precision farming isn’t here to re-invent the agronomy. It is to utilise to the best we can, the existing agronomy.”