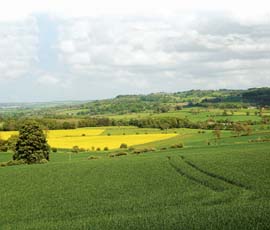 Cereal crops look promising this season, with low levels of disease, but that could all change if there is heavy rainfall in late spring, say our Crop Watch agronomists.

Much of eastern England received less than 20% of normal recorded rainfall in March and crops are now showing signs of drought stress, says Norfolk agronomist Marion Self, of Prime Agriculture.

“Dry conditions have hardened weeds, so robust doses of spring herbicides are required, particularly for fops and dims in spring crops and sulphonylureas for the control of brassica weeds and poppies in cereals,” she adds.

In cereals, fungicide programmes are well underway, but as we approach the final leaf three T1 timing, Ms Self is warning growers not to reduce rates, as there is plenty of septoria, mildew and rust inoculum on lower leaves.

“Doses should be robust enough to protect emerging leaves for at least three weeks until the next scheduled spray, allowing for wetter conditions and any unforeseen delay.”

Hampshire/West Sussex AICC agronomist, Todd Hunnisett, says disease levels are extremely low in cereal crops, apart from one block of Oakley winter wheat he has seen, which was severely infected with yellow rust.

“The crop has had a massive dose as a T0 spray and will continue to get money thrown at it if the disease stays active,” he adds.

“Many of these crops will receive SDHI chemistry at T2 timing, including more plant growth regulators based around chlormequat and Moddus (trinexapac-ethyl),” he adds.

Winter barley is at growth stage 32/33 and looks extremely well now it has got away from manganese and nitrogen deficiency, says Mr Cairns.

“There has been sufficient leaf wetness to allow rhynchosporium to develop, but the T1 included prothioconazole to fight the problem,” he adds.

In winter oilseed rape, sclerotinia spray programmes are imminent and control will depend on the interaction between temperature and rainfall at flowering, says Ms Self.

“Although rainfall is required for spore release and infection, sclerotinia attack has been serious in previous dry springs,” she warns.

Many growers are considering a two-spray strategy for sclerotinia control, says Mr Cairns. “Ours will possibly feature either boscalid or a strobilurin, as we saw some excellent results using picoxystrobin last season.”

Rape crops are flowering, so pollen beetle problems should soon be over, but numbers are high, so spring rape growers should be wary, says Mr Cairns.

In Devon, Neil Potts of Matford Arable Systems says rain is desperately needed to wash in nitrogen fertiliser and get spring crops going, although the dry weather has been ideal for planting spring crops.

But insect activity has increased in the warm weather and pollen beetle panic in oilseed rape is being followed by unprecedented levels of pea and bean weevil in emerging pulse crops. “They will soon receive a pyrethroid insecticide to control them,” says Mr Cairns.