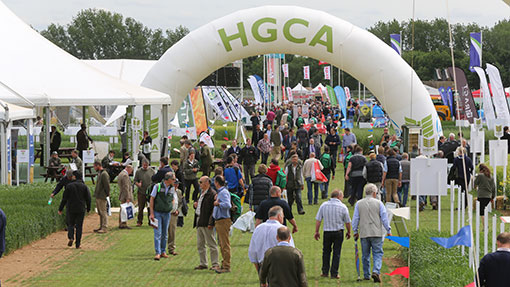 This year’s event in Cambridgeshire promises to address the biggest issues affecting arable farmers. Luke Casswell  caught up with AICC agronomist Peter Brumpton to find out what growers can expect.

In a high disease season and with blackgrass a constant threat, the HGCA stand will offer growers the chance get one step ahead next season with its new research and more than 150 varieties on show.

“Variety choice is often key and this is a great chance to be able to compare and contrast varieties and particularly look at the treated and untreated plots which have a great visual impact this year,” explains Mr Brumpton.

There is also the opportunity for growers to get involved with a new blackgrass initiative, which asks arable farmers to provide their own blackgrass samples and in return they will get a free analysis of the blackgrass resistance status across their own farm.

“It will be nice to know what solutions are in the pipeline and see what innovations such as this new superwheat is going to bring to the party.”
Peter Brumpton, AICC agronomist

This comes as part of new research looking at the scale of blackgrass resistance across the UK in a bid to find ways of tackling the troublesome weed, says Mr Brumpton.

The neonicotinoid ban is one of the biggest worries for oilseed rape growers, and visitors will be able to hear what the HGCA is advising farmers to help them protect oilseed rape through its vulnerable early growth stages this autumn.

“It will be nice to know what solutions are in the pipeline and see what innovations such as this new superwheat is going to bring to the party,” Mr Brumpton says.

Soil management will provide a key discussion point, and Mr Brumpton says there is no better way to get practical advice on it than with visual demonstrations such as one on the NIAB stand.

“Researchers will be on hand using a soil pit to give growers advice on organic matter, soil compaction and allow them to see the benefits of things such as cover crops,” he adds.