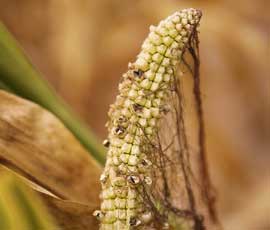 Iowa, United States. American heartland and food capital of the world. Graced with prime land producing high-yielding crops and helping to make the USA one of the most powerful agricultural producers in the world.

In the spring of this year, however, North America entered its worse drought since 1956 – one that has been described as a “natural disaster of epic proportions”.

The ramifications have been catastrophic for some individuals, with many fields being completely wiped out and livelihoods destroyed. Some estimates suggest about 80% of farmland is currently affected.

There are also fears that more is to come, with the drought predicted to persist into 2013.


The biggest area of “exceptional” drought (the most severe of five classifications) centres on the Great Plains, with Nebraska and Kansas some of the worst-hit areas. But every state west of the Mississippi is struggling, with Oklahoma, South Dakota and Colorado also badly affected.

Such extreme weather means the world’s largest exporter of corn, soya beans and wheat has produced smaller crops in every sector this year.

While wheat has been one of the least affected of the major crops so far, the possibility that the drought will continue into 2013 is causing fears – particularly in Kansas, the top US producer of winter wheat – that next year’s crop may struggle. Such sentiments are backed up by recent USDA reports suggesting that nearly one-quarter of the winter wheat that has germinated is in either “poor” or “very poor” condition.

Despite the weather woes, the irony is that the USA’s arable sector remains in a relatively strong position.

Although the drought could represent a $75-150bn hit to the US economy, arable production has proved resilient during the worldwide recession and the feeling among growers is that many in the industry will bounce back.

This optimism can be attributed partly to record-breaking prices for grain and the “safety net” of crop insurance. In sharp contrast to the UK, where farmers are completely exposed to problems caused by the weather, US producers can choose to manage their level of risk by taking out insurance.

Under the federal crop insurance programme, which dates back to the Great Depression, farmers can buy insurance policies for more than 100 crop types that cover poor yields, declines in prices or both. The insurance is obtained through private companies, but the federal government pays about 62% of the premiums, plus administrative expenses.

About 85% of US farmland – roughly 281m acres – was covered by crop insurance this year (higher than in any previous year).

But while crop insurance and high prices have saved many arable farmers, livestock and dairy producers have been less fortunate, with insurance less readily available and high feed prices taking their toll.

Beef and dairy producers have been forced to sell their stock, slaughter early, or even quit completely. Figures released by the USDA suggest September cattle placements on to feed lots dropped 19% compared to the same month last year. According to recent figures, dairy cows are being slaughtered at the fastest rate in more than 25 years.

The USDA currently lists 54% of the nation’s pastures in “poor” or “very poor” condition – the lowest two pasture condition ratings. And this lack of quality of grazing land means beef producers are having to supplement animal diets with expensive feeds, causing possible losses of up to $200 a head.

It’s a major blow to a part of the industry that had been performing relatively well in recent years, with cattle meat providing the USA with its second largest valued agricultural product.

Yet weather aside, what will undoubtedly have the biggest influence over farmers’ fortunes in the next few years is the outcome of the Farm Bill.

Currently being debated by Congress, this multi-billion-dollar piece of legislation is being keenly watched by farmers, particularly as crop insurance is a key element of the policy.

While farmers are keen for Congress to pass a five-year plan before the new year, the likelihood of this happening is becoming slimmer by the day. Until it happens, producers across the pond face uncertainty. However, there’s no doubting the strength of US agriculture – even in the midst of the sandstorm created by the worst drought in living memory.


In the video below, Jay Lynch talks about farming in the USA.