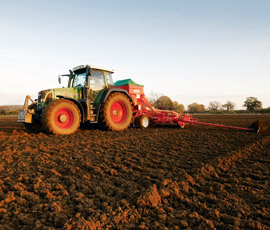 A prolonged dry spell has allowed field work to kick off again for our Crop Watch agronomists this week, with Paul Sweeney still hoping to use his last opportunity to drill winter wheat.

“If it [the dry spell] lasts until the weekend and there is a bit of wind, then there might yet be some sowing.”

In contrast, Shropshire agronomist Bryce Rham will be drilling 2,000ha of spring crops – 1,600ha more than usual. “A dry spell will be needed as much of the intended land is the heavy land that did not get planted in the autumn.”

Winter barley crops are looking sorry for themselves, with very few with more than one or two tillers. “I still have about 30% of crops to get a residual on, but thankfully most fields are still relatively clean and with the spring application of Liberator (diflufenican + flufenacet) I will add DFF to help with emerged susceptible weeds.”

In the south, Iain Richards is prioritising some nutritional TLC for his later drilled, backward crops to give them a welcome boost going into the spring. His main aim is to boost root development, so wheats will receive a plant growth regulator and some phosphite to aid that further once growing.

“The phosphite will also give them the extra P they’ll find hard to access with restricted roots in cold, wet soils.”

Although weed burdens are predominantly low, in Suffolk, Marion Self of Prime Agriculture has reminded growers of the requirements if applying Atlantis (iodosulfuron + mesosulfuron) to tackle blackgrass. Soils must be above 7C and the crop and weeds actively growing for four days.

Pre-emergence herbicides applied to early sown cereals appear to have done a remarkably good job, with relatively low levels of blackgrass in known “dirty” fields. In the main, weed populations are also relatively low in non-herbicide treated crops, she says.

She adds that many “at risk” cereals did not receive the planned autumn manganese application. “As these crops begin to grow they are already showing severe symptoms and should be treated with robust doses as soon as possible.”