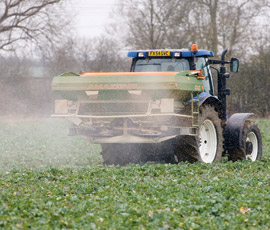 The recent spell of drier weather has seen the resumption of wheat drilling in the South, but for some growers it is only the start as the wet weather prevented them from getting on fields at all this past autumn and winter.

Neil Potts of Matford Arable highlights that in 2001 a large acreage of wheat was planted in the third and fourth weeks of February and they didn’t turn out too badly. “So there is hope for these late-drilled crops.”

However, these late-drilled crop will need to be managed differently from a conventionally drilled crop, much more like a spring crop. This means they will need nitrogen underneath them at a very early stage if it hasn’t been applied to the seed-bed, he says.

“They will also be much less tolerant of weed competition so early weed control will be of paramount importance.”

However, Philip Vickers of Farmacy warns crops being drilled into fields at risk of wheat bulb fly should have an appropriate seed treatment, now the egg hatch is well under way. “It is interesting to note that at Dow AgroScience’s north Lincolnshire pest watch site, egg hatch was at 50% last week.”

“Hopefully, there will be little trouble from the pest this year, particularly with crops being so thin it will not take many larvae to soon cause a lot of damage. Now it will be a case of looking closely for deadhearts in the coming weeks.”
David Martindale, Arable Alliance

Similarly, Arable Alliance’s David Martindale has also seen chlorpyrifos being applied. “Hopefully, there will be little trouble from the pest this year, particularly with crops being so thin it will not take many larvae to soon cause a lot of damage. Now it will be a case of looking closely for deadhearts in the coming weeks.”

Spring barley being grown on heavier land that would not typically be considered good for the crop will also need managing differently, says Mr Martindale. “Keeping the seed rates up on these heavier soils will be important as barley cannot compensate for a thinner plant stand compared with wheat.”

In the South, AICC agronomist Tod Hunnisett adds that these areas are likely to have a high grassweed history. “With that in mind, a high proportion of these fields will be getting pre-emergence recommendations. For blackgrass and ryegrass, flufenacet/DFF mixes make a good starting point, and for meadowgrasses pendimethalin will be helpful.

Where spring oilseed rape and linseed are planned, the temptation to go in too early should be avoided, says Mr Hunnisett. “These crops need to grow away as soon as they are planted, and soil temperatures need to be considerably warmer than they are at the moment before we start thinking about drilling them.”

Read their full blogs at the Crop Watch webpage