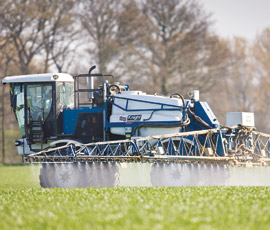 As crops burst into life thanks to the change in weather, plans must be put into place for T1 fungicides, warn agronomists.

In the North, independent Yorkshire agronomist Patrick Stephenson is matching fungicide choice and rate to crop potential to limit risk.

Most of his T1s will be prothioconazole based, with some growth regulator added into the tank to even crops up and preserve tillers.

“Late-drilled wheats will have a spray programme similar to spring wheat, which at the risk of offending multiple manufacturers, will be cheap and cheerful,” he says.

Agrii agronomist Iain Richards is of similar mind in the South, and his T1s are also based on prothioconazole with the addition of a multi-site fungicide such as folpet.

However, he doesn’t rule out using a more expensive SDHI-based T1 if septoria does explode in the coming days.

Knowing how rapidly the disease can bite us, we’re not taking any chances on the fungicide front,” he notes.

In the West, AICC agronomist Stephen Harrison is waiting to see if later sown crops skip a leaf in their race to maturity, which can catch growers out.

He has applied very few T0s to protect crops until growth stage 32, so vigilance will be required to ensure that the T1 spray is correctly timed.

“Spraying will commence when final leaf three is emerging, which for the bulk of the crops in the area will be 3-5 May at the earliest,” explains Mr Harrison.

He is also seeing problems with new and potential weed growth in his wheat plants, with many polygonums germinating on the bare ground between backward plants.

Breaking apart lumps of soil Mr Harrison can see many more still to emerge, so any herbicide application will have to be delayed.

“We will wait until the T1 application and metsulfuron/CMPP mixes will figure strongly,” he adds.

Having herbicide success is Frontier agronomist Brian Ross in Suffolk, with blackgrass showing distress from Atlantis applications that were included in the T0 fungicide mix.

However, in some cases he had to add a further herbicide to the mix due to larger, more aggressive weeds. “These too are being well controlled,” he notes.

Not being so well controlled are pigeons, which have been joined by skylarks to devour Mr Ross’ finest crop of sugar beet.

“Last Friday the rows were easily seen, but by Monday you couldn’t see the rows. Pigeons and skylarks have grazed them off.

“Although they may recover, along with the frosts it will delay herbicide applications, which is a further headache,” he explains.

Winter barley crops are a mixed bag, says Mr Stephenson, with many struggling and now being overtaken by their spring-sown cousins.

He doesn’t see any value in investing too much for crop protection in the worst of the bunch, with very little hope of them pulling through to produce a good yield.

“It is difficult to keep the faith,” he concludes.