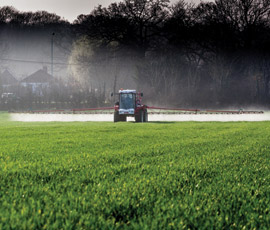 On his rounds in the north of England, Spud Agronomy potato specialist John Sarup has seen drifts of sand around field boundaries and across roads.

Despite seed tubers still being covered, he advises reridging prior to crop emergence and any herbicide applications in the coming days.

“Growers will also have to make sure that cultivations are timely after ploughing to avoid freshly ploughed land baking out in the strong winds,” says Mr Sarup.

After inspecting some seed potato stocks, surprisingly there have been very few quality issues, with just the occasional soft rot seen.

Mr Sarup notes that powdery scab seems to be the most prevalent fungal disease, with the wet conditions last year favouring the disease.

With disease pressure low, Mr Martindale is prioritising his outstanding herbicide applications in winter wheat crops, rather than a T0 fungicide.

“At present disease pressure is low, so a T0 will be by-passed in favour of grassweed control, except on rust-prone varieties,” he explains.

Mr Martindale is seeing disease in his oilseed rape, though, with light leaf spot proving a hard to control, despite applying fungicides already.

In the South AICC agronomist Tod Hunnisett is optimistic that his early-drilled oilseed rape crops will be able to yield as well as any other year.

Despite heavy pigeon damage, he has seen a crop well on its way to recovery, with extended stems growing away from the feathered pest.

“It has strengthened my resolve to make sure as much rape as possible is drilled before 15 August next year, even if verticillium wilt risk is increased,” says Mr Hunnisett.

Wheat management this year will be difficult, says eastern Farmacy agronomist Philip Vickers. His concern is the vast variation in crop yield potential across his area.

“The appropriate T1 fungicide programme will have to be tailored to each situation,” he explains.

If disease pressure remains low he will look for a more protectant fungicide strategy, with the inclusion of the multi-site active chlorothalonil.

However, if the rain arrives like last year to splash septoria inoculum up the canopy, a more curative approach may be necessary, Mr Vickers believes.

“In thin crops, a traditional T1 of a triazole fungicide could suffice, but rates will be high to reflect the drop in efficacy against septoria of those products,” he adds.

Winter barley crops in the East are nearing growth stage 30 and Mr Vickers will be applying a T1 in those crops in the coming days.

“I will also be applying trinexapac-ethyl or kind formulations of chlormequat to most winter barley crops to strengthen stems, but at the same time I am mindful that some growers will require the straw.”

In Devon, Matford Arable agronomist Neil Potts has seen the majority of his spring barley emerge at about the same time, despite drilling dates varying hugely.

“The delay in emergence doesn’t seem to have had any detrimental effect on yield though,” he points out.

Don’t let sclerotinia catch you out