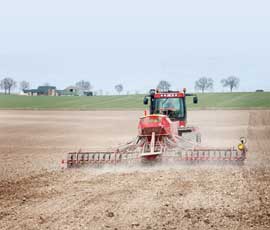 T0 planning is top of the list for our Crop Watch agronomists while nitrogen is being applied to some crops to capitalise on the favourable conditions.

In the North, Hamish Coutts feels that now the NVZ deadline has passed and the ground is fit to travel on, “there’s an opportunity to apply the first top dressing of nitrogen plus sulphur” on winter barley and oilseed rape.

Winter barleys and some oilseed rape crops are starting to look as if they have used up all the currently-available nitrogen, he adds.

“Our first OSR nitrogen will be going on in the coming week once spring barley drilling is completed,” says Iain Richards, based in the South.

“The February chill has really done our oilseed rape some good. There are still some over-thick crops around, but our crops are generally not excessive. The rape is well-placed to respond to its canopy nitrogen.”

Bryce Rham, based in Shropshire, is also looking to apply nitrogen this week as “winter crops are now looking rather yellow.” He puts the yellowing down to lower leaf senescence and the need to start getting nitrogen on.

Moving to disease, Mr Rham says rust has been slow to appear in forward wheat crops. “I have yet to find any yellow or brown rust.

“Frosts have dampened down the mildew for now, but there is lots of septoria in the bottom of most crops, so I will most definitely be applying a T0 to most wheats.”

In the East, Marion Self says the recent cold weather has briefly slowed rust developments.

“Susceptible yellow rust varieties, such as Oakley, without a specific seed dressing for rust control may benefit from an appropriate triazole, to stall disease progression until T0.”

A T0 will also “pay dividends” in barley, says Hamish Coutts. “Winter barleys are also carrying various levels of disease, dependant on variety. Mildew, net blotch and rhyncosporium have all been spotted.”

“We held back on the propyzamide until December, when both temperatures and soil moisture deficits had dropped. And we’ve seen fantastic control, which is just as well with the worryingly mixed autumn blackgrass control we’ve seen in wheat.”

Ms Self says clopyralid-based spray applications have started in oilseed rape to control thistles, mayweed and cleavers. “To avoid crop injury these applications should be completed before buds are raised above the canopy.”