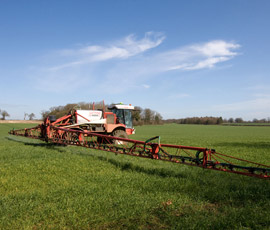 With March temperatures 3C below the 30-year average and the cold spell continuing into April, crop growth remains painfully slow.

Along with the cold temperatures, crop canopies (or not as the case may be) only received 54% of the normal sunshine hours for the same month.

In Yorkshire, AICC crop consultant Patrick Stephenson has seen his winter wheat being split into two tiers – “normal” and “the rest”.

“Unfortunately, here in the North most crops fit into “the rest” category. It has, in essence, created a two tier agronomy advice stream,” he explains.

The crops are divided on drill date, with those drilled before September 20 being close to where he would expect in a normal season. Later drilled crops are a real mixed bag.

“It can be attributed to the drop in temperature that occurred from late September and early October,” he notes.

Septoria can now be found easily in the most forward crops in Yorkshire to the Southern counties, where Iain Richards is hoping to apply a curative T0 to hold the disease.

The Agrii agronomist believes it won’t be the end of the world if wheat crops don’t receive a T0 and in those cases, a more robust and curative T1 is planned to bolster protection against the number one yield robber – septoria.

“Targeting leaf four with a T0 will be a priority, as it will have a bigger contribution towards yield in this year’s thinner crops.”
Iain Richards

“Targeting leaf four with a T0 will be a priority, as it will have a bigger contribution towards yield in this year’s thinner crops,” he points out.

“Where there is no T0, an SDHI added to the T1 will be used in many cases for its physiological benefits as much as disease control.”

Mr Richards advises growers to dissect plants to determine their fungicides are targeting the correct leaf emergence. “It is the only accurate way of predicting growth stages,” he adds.

Aside from the need for the first fungicide spray, cereal crops are now in desperate need of the main grassweed herbicides that are still on outstanding spray recommendations.

Frontier advisor Brian Ross is concerned with the numbers of jobs that are now stacking up in farm office trays across his area that will inevitably result in many jobs being done at once.

“Tank mixes are my concern, with the possibility of untested combinations being applied to crops that are already weakened by the current conditions,” says Mr Ross.

He urges growers to ensure they seek advice before combining any jobs in the sprayer tank, or risk compromising crop safety.

Mr Ross has seen the largest pigeon presence for many years and where crops have failed to grow away from the feathered pest, viability has been compromised.

“They have proved impossible to keep off. Many fields have plants, but these are stumps and losing viability day-by-day,” he says.

When temperatures rise, Mr Ross thinks these crops will have limited branching and growth could be restricted to single, weak stalks that will need careful management.

In the South West, AICC agronomist Stephen Harrison has a similar assessment of some of his oilseed rape crops, describing them as a “vast array of white skeletons”.

However, on a positive note he has seen his rape plants pushing out fresh fibrous roots, ready to soak up the applied nitrogen when conditions for growth improve.

“When growth starts, it is likely to be explosive, so attention will need to be paid to growth stages for input timings,” he warns.

Weeds are an issue where the crop canopy has been held back, failing to smother the bare ground between the plants.

Many of his growers have lost patience waiting for the worst crops to spring into life and decided to cultivate in preparation for spring oilseed rape or linseed.

“I know rape can make spectacular recoveries, but when half the field is bare and the rest is heading that way, there is just no chance,” he concludes.