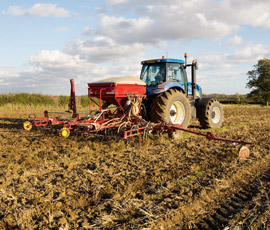 The cold and wet weather has put a dampener on field activity and concerns are growing over the vernalisation of late-drilled wheat crops.

AICC agronomist Paul Sweeney is particularly concerned about crops drilled in the last few days of February, as they have only just sprouted and will need vernalisation before growers know for sure that it’s a crop.

“I understand that cold accumulation for the crop starts at the earliest sprouting, so this cold weather will help it.”

In the South, Agrovista’s Tim Bullock sees the cold snap putting a halt to growth, but says those crops covered by cambridge rolls have established well.

“Some crops were rolled at the beginning of the month and have responded well. Cambridge rolls are still an undervalued management tool – this winter has reminded many just how important they are. I have seen fields where the only established crop is in the wheeling of the quad bike.”

She also reports low levels of disease due to the cold weather, but says septoria is present.

“Septoria is present on the lower leaves of all varieties; its rate of development will depend on varietal resistance, temperatures and rainfall, especially during April to June. Yellow rust has been seen in Oakley wheat crops, although the recent cold spell has stalled its development.”

Over in Shropshire, AICC agronomist Bryce Rham says as cold and wet conditions have delayed crop development this may well mean that normal T0 fungicides spray turn into T1 applications. “I would like to sort out T0 applications, but with conditions as they are I am loathe to get anything on farm, as T0 may well turn into T1.”

In oilseed rape, the perennial problem of pigeons and deer are causing issues, says Mr Bullock. “Keeping them off crops is important, as if they keep stripping off new growth then plants are going to struggle. The only saving grace is that they are removing phoma and light leaf spot from some crops.”

Pigeons are also an issue for Mr Rham. “Oilseed rape crops are suffering from pigeon attacks and scorch from the bitterly cold conditions and are not accelerating away. I am not rushing to get light leaf spot/phoma sprays on, as it is either too wet or too cold for products to work.”