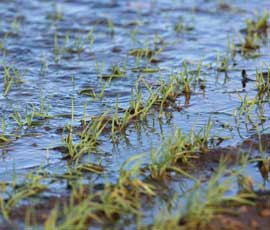 Damage to soils during recent months may take years to repair, warns an agronomist, urging growers to plan remedial work for autumn 2013 now.

The South West has suffered worse conditions than many regions around the UK and Avon agronomist Stephen Harrison has seen slumped, lifeless seed-beds where his clients managed to drill wheat during the winter.

“We managed to establish some wheat in a dry week through December and on kind land that has come away respectably, but on heavier soils I’m not so sure it was a good idea,” says Mr Harrison.

Even the rough seed-beds on heavier land has capped and suffered from small particle wash-off, leading to pore spaces being filled up, suffocating the soil and providing less-than-ideal conditions for crop growth.

“Of great concern is the number of drowned worms I am finding on the soil surface, which crows and rooks are now feasting on.

“They play such a vital role in the biology of soils. I just hope the recovery will be rapid once the weather improves,” says Mr Harrison.

“Start planning for autumn now and identify which fields will need the most TLC.”

Mr Harrison is still planning to drill wheats with a shorter vernalisation period – such as Claire and Panorama – where possible until the end of February. However, this doesn’t apply to all soils and where a spring seed-bed can’t be achieved, he recommends rest and recuperation.

Meanwhile, in Yorkshire, AICC agronomist Patrick Stephenson is considering which of his extremely variable crops will escape destruction. He believes any winter wheat crops should have a minimum plant population of 30 plants/sq m.

“I am always keen to seize on a target or goal as guide points for production. In the case of wheat I see 5t/ha as a key component.

“The question is: can the crop reach that? Will a redrilled crop beat that? It seems simplistic, but it focusses the mind,” says Mr Stephenson.

Spring drilling has not started in Yorkshire, but pressure is building to get drills moving. However, Mr Stephenson reminds growers that cold, wet and forced seed-beds are not the way forward.

In the South, Nick Brown of ProCam says he won’t see any drilling until at least the middle of February, after what he believes is the worst season ever for many growers.

“The financial implications of the failed oilseed rape crops and winter wheat left undrilled is yet to be fully felt, and the weather in the next eight weeks will determine how acute the pain is,” says Mr Brown.

For most winter wheat varieties it will be too late to drill by the time it dries enough, says Mr Brown, so he will be replacing the wheat area with spring barley and the heaviest ground will again be left fallow.

In the east of England there is less gloom, with Frontier adviser Brian Ross noting that he has little to complain about compared with his counterparts elsewhere.

“In general we at least have crops in the ground and many are looking good, thanks largely to the insulation of the snow after temperatures as low as -13C.”

Mr Ross has not managed to complete much autumn spraying and is concerned by the limited options for controlling grassweeds in winter barley crops, but less so in wheat. “It’s just a case of waiting for the right conditions,” he adds.

Yellow rust has been reported in the area in volunteer oilseed rape, but Mr Ross believes disease levels are low at present.

Early fertiliser application will be vital to stimulate growth of the backward crops this spring, but care needs to be taken in current conditions.

“Small rape canopies and struggling, poorly tillered cereals are turning thoughts to early applications. However, with soils at field capacity and given the early timing applications should be limited to 40kg/ha to minimise the risk of significant leaching,” explains Mr Brown.

Learn more about managing your soils