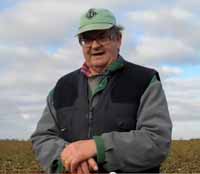 Mr Hotchkin told Farmers Weekly chief reporter Johann Tasker that the state of the field and the variability in condition of the beet meant it was impossible for a contractor to lift as a whole crop.

“We face destroying it,” Mr Hotchkin said. “But we will have to do that mechanically. There is not sufficient green leaf area to take a chemical down to destroy it.”

We will have to wait for drier weather to plough the crop in.  We can’t get on to the field in this state. It’s too wet,” he added.
That meant next year’s cropping of the field would suffer. “We will lose the beet this year and the following crop,” Mr Hotchkin said. It will have a knock on effect, he said.

The meeting heard that sugar beet growers faced losses exceeding £15m, but they would not face further penalties, according to British Sugar.

The processing giant said it would not enforce rules requiring growers to deliver at least 95% of their contracted tonnage.
Farmers who fail to deliver the agreed amount of beet averaged across two seasons can usually expect a pro-rata reduction in quota allocation. But the rule will be disregarded.

• What’s your view on the sugar beet situation? Have your say and see what others are saying on our forums